A wide variety of GP2 strategies at work in Monaco 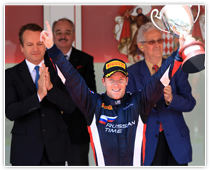 The two softest tyres in Pirelli’s GP2 range, the P Zero Yellow soft and P Zero Red supersoft, performed perfectly in the tight and twisty confines of Monaco – allowing the teams to utilise a number of different race strategies. With overtaking so difficult at Monaco – round four of this year’s GP2 Series – qualifying was crucial, and this had a vital effect on the race strategies. The supersoft, with its rapid warm-up time, was quicker over one lap but the soft tyre, with its greater durability, had the advantage over a race distance. Arden driver Johnny Cecotto took pole after a qualifying session that was unusually held on Thursday, on a comparatively ‘green’ track, and split into two sessions in order to avoid traffic problems. Cecotto did an excellent job to qualify on pole using the soft tyres, just ahead of his team mate Mitch Evans: the reigning GP3 champion and recipient of a Pirelli scholarship, which has helped the New Zealander graduate to GP2 this year.

However, Cecotto made a relatively slow getaway in Race One, allowing Evans past him, and under braking for the first corner he crashed, triggering a pile-up that eliminated nine of the runners. 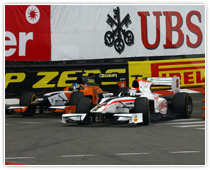 The 42-lap race was red-flagged and at the re-start Evans was into the lead, having switched to the supersoft during the red flag period. Russian Time driver Sam Bird pursued him on the soft tyre. Evans pitted on lap 13, having to change all four tyres to the soft compound while Bird pitted four laps later and just changed the rears, as he stuck to the soft compound. This decision was critical in constructing Bird’s 22-second victory from Trident driver Kevin Ceccon, who followed a similar strategy but stopped two laps earlier. Evans salvaged third place while the highest climber was Lazarus driver Rene Binder, who completed one of the longest first stints – 29 laps – on the soft before changing the rears only, climbing from 15th at the re-start to seventh at the finish. Just behind him was MP driver Adrian Quaife-Hobbs, who started on the supersoft and changed all four tyres on lap 10. Bird commented: “Some people thought that the supersoft would last a bit longer. We thought that they wouldn’t and that was the case. So I was pacing myself behind Mitch. I could not really push. Then he pitted and I pushed for three or four laps to build a gap to everybody, which we did.” Tyre strategy was just as important to the 30-lap sprint race on Saturday, with no compulsory pit stops. The grid was formed of the top eight finishers from Race One reversed and conditions were made extremely tricky by some light rain that started to fall just before the start. Rapax driver Stefano Coletti won his home race on the soft tyre, having started from third on the grid and taken the lead on lap three. From then on, he successfully managed his tyres all the way to the finish, backing off to conserve them when he was able to, and pushing hard to extend his advantage when he could. As a result, Coletti became the first Monegasque driver to win at home since Louis Chiron in 1931, extending his championship lead to 24 points over Carlin’s Felipe Nasr in the process. Coletti said: “The soft tyre was the best solution: we still had tyres at the end and if the race had gone on for another 10 laps, it would have been no problem.” Pirelli’s racing manager Mario Isola concluded: “In some tricky conditions, Monaco turned out to be all about strategy, as we expected. Bird’s decision to use the soft tyre in the feature race and change the rear tyres only turned out to be the key to victory. However, the drivers also had to decide when was the best time to use the supersoft, and some of those who favoured the soft tyre in the feature race – such as Bird – needed to make the supersoft last in the feature race, which was a big challenge. Coletti provided everybody with a masterclass on how to use the tyres effectively in the sprint race. Although he was able to push hard to overtake and build up a lead, he also knew when to back off to cool the compound and extend its life. As a result of which, he not only won his home race commandingly but he also had plenty left in reserve: an excellent achievement at Monaco, where it is only the tyres that provide the mechanical grip needed to negotiate most of the corners.” This year’s GP2 season takes in 11 rounds and 22 races. The next round of the Pirelli-equipped series takes place in Silverstone, United Kingdom, from June 28-30.

A wide variety of GP2 strategies at work in Monaco
Newsroom