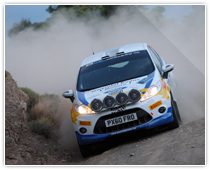 Elfyn Evans celebrated winning round two of the Pirelli-supported FIA WRC Academy on the Acropolis Rally in Greece (24-26 May) by praising the outstanding performance and durability of his Pirelli tyres. One of 11 future champion rally drivers competing in the young-driver training category on the event based near Athens, Evans successfully negotiated punishing rock-strewn stages, muddy patches and ground temperatures exceeding 40 degrees centigrade to win ahead of fellow British driver Alastair Fisher and Brendan Reeves from Australia. Following his victory, the first of his WRC Academy career, 23-year-old Evans said: “I’m very pleased with this result after what was the toughest rally I have done. It’s been far from easy because the stages are very rough. But my Pirelli tyres have been absolutely fantastic in how they’ve performed. Even though the stages were very, very rough in places, we’ve not had one puncture. Looking at the state of roads it’s difficult to believe that the tyres could last at rally pace for so long so it’s a big credit to Pirelli that they did. The engineers and technicians have done a fantastic job.” The WRC Academy resumes on the high-speed Rally Finland in early August.