Beijing, 15 September 2009 - The Italian Ministry for the Environment, Land and Sea, the Ministry of Environmental Protection of the People's Republic of China, and the Pirelli Group signed a protocol agreement for distribution of technologies for reduction of diesel vehicle emissions in China. The signing took place today in Beijing, in the presence of the Italian Minister, Stefania Prestigiacomo, Chinese authorities, and the Chairman of the Pirelli Group, Marco Tronchetti Provera. 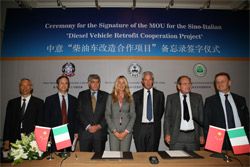 The agreement is part of the environmental cooperation program launched by the two ministries in 2000, with implementation of more than 90 cooperation projects for containment of environmental impact through development and distribution of cutting edge Italian technologies.

The agreement foresees collaboration among the three parties in development of projects for distribution of filter systems for reduction of particulate emissions from diesel vehicles already in circulation ('retrofit') and introduction of technologies and advanced products, as the Pirelli products have been shown to be following tests and pilot projects already completed.

Technologies for containment of vehicle pollution represent one of the most promising markets in China, given the growing attention that the local institutions are reserving to environmental problems. A joint commitment by the Italian environment ministry and the Chinese environmental protection ministry will focus on the five provinces recently singled out by the Chinese government for adoption of measures to limit circulation of polluting vehicles, among which Shandong (the location of the Pirelli plant) alone counts more than 100 million inhabitants, for distribution of filter systems of Pirelli Eco Technology, as already done in Beijing.

The second protocol agreement signed today by the Italian Ministry for the Environment, Land and Sea, the Municipality of Beijing, and Pirelli Eco Technology to support installation of filters on polluting vehicles circulating in Beijing, is part of this commitment. The agreement follows the completion of a pilot project launched in 2008, which brought homologation of the filters produced by the Pirelli Group, thanks to their particular technological characteristics. The city of Beijing has already ordered a significant quantity of  Pirelli Eco Technology filter systems which will be fitted on buses in the capital city.