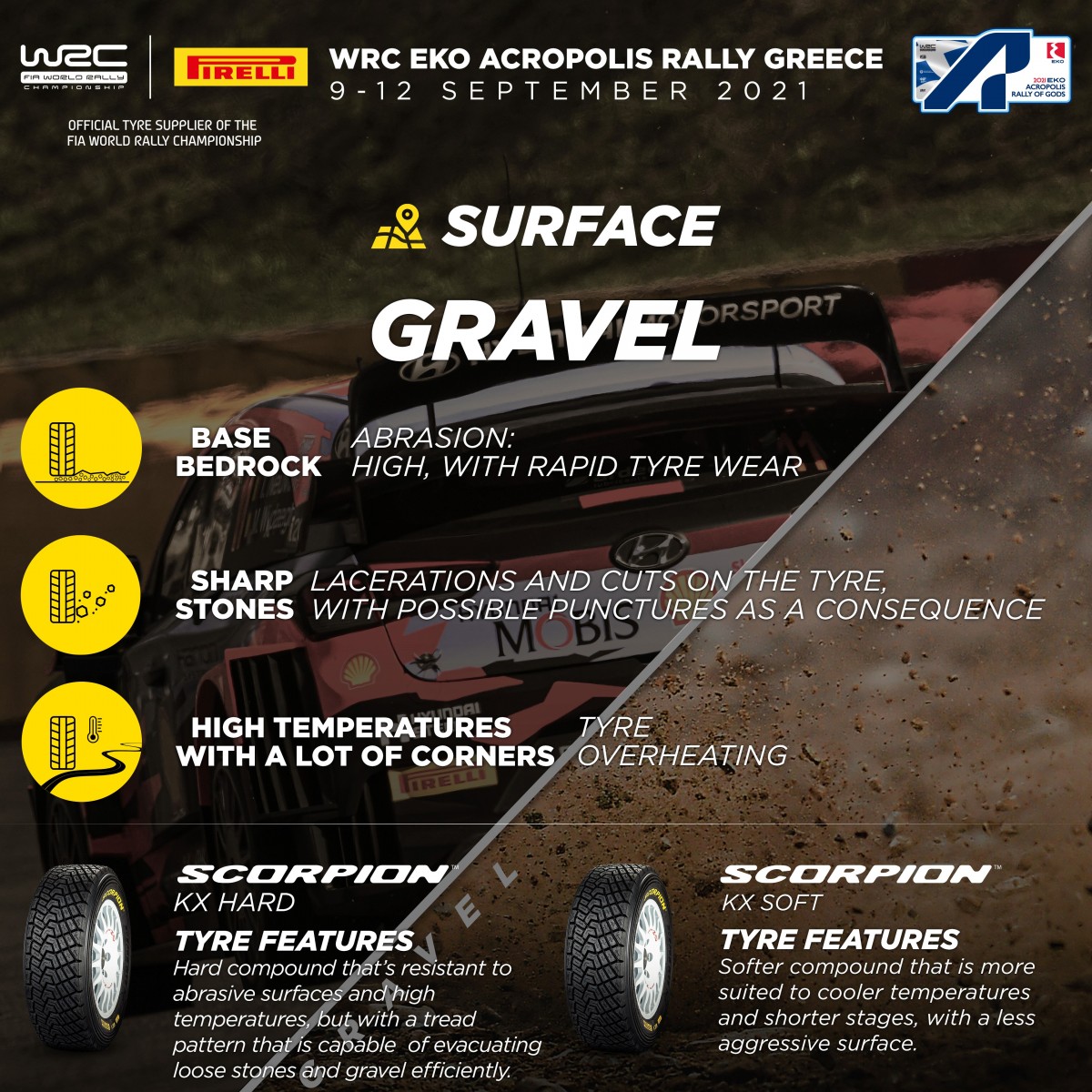 Milan, September 6, 2021 – Another of the FIA World Rally Championship’s most legendary events makes its return as part of Pirelli’s comeback season in the top category, with the Acropolis Rally in Greece hosting round nine this weekend. After an absence of 18 years, the ‘Rally of the Gods’ is back with many of the classic stages that established the event’s reputation as a car-breaker that is extremely tough on the tyres as well.

The Pirelli tyres in Greece

Scorpion KX: Pirelli’s gravel rally tyre comes in hard and soft compounds. In Greece, the hard will be the first choice for the abrasive stages and high temperatures. The soft will also be available as an alternative, providing grip for or damp surfaces, especially for those running first on the road. As a result, it can form an important part of the strategy. In both compounds, the tyre features additional reinforcement, particularly in the sidewall, to guard against cuts and lacerations: a common feature of the Acropolis.

Terenzio Testoni, rally activity manager: “After the Safari Rally, we are happy to see another famous event coming back to the WRC calendar this year. Pirelli has won the Acropolis Rally many times with drivers such as Ari Vatanen, Carlos Sainz, Colin McRae, Richard Burns, and Petter Solberg – as well as in more recent years when it has been a round of the European Rally Championship. This recent experience is extremely useful for us as well as we prepare for this event. The combination of a rough and rocky surface and high temperatures makes it an extremely tough rally for tyres, but with our knowledge of what it takes to conquer this event, we are confident that our Scorpion KX tyres will be up to the considerable challenge. Controlling wear will be the key to tyre management in Greece, where it's important to have a strong tyre to guard against all the sharp stones as well as a resistant tread.”

Pirelli will bring around 2150 tyres to Greece, of which 550 will be for the top class of World Rally Cars.

Each of the WRC drivers can use up to 32 tyres during the rally, with a separate allocation of four tyres for shakedown. For the rally, each car has a total allocation of:

Pirelli will also supply 1600 tyres to the other four-wheel drive cars in the event, including those entered in WRC 2 and WRC 3:

The big number: 33.2. The longest stage of the rally, the 33.2 kilometres of Pyrgos, will take place on Sunday, when it separates two passes of the rally’s famous Tarzan test. It means the crews still face a significant challenge on the final day of the event, underlining the emphasis on endurance and durability.

The harshness of the stages in Greece and temperatures well in excess of 30 degrees centigrade means that the hard compound should be favoured over the soft. The main consideration for the drivers will be how to get the best out of a set of tyres across a loop of stages, so some degree of tyre management is expected. The decision on how many spare tyres to take for the rough roads will also be crucial.

Tyre Fitting Zones. With many of the stages taking place some distance away from the service park in Lamia – especially those on Friday closer to Athens – the itinerary includes three Tyre Fitting Zones in lieu of a full service opportunity. As the name suggests, here crews can fit a replacement set of tyres and can also make other changes to their cars, but only using equipment and parts they carry with them.