Reigning Italian Rally Champion Paolo Andreucci has got his title defence with Pirelli off to a perfect start by claiming his fifth victory on the Rally del Ciocco. 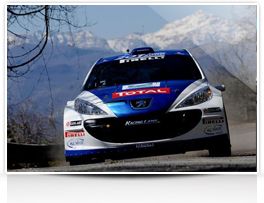 The opening round of the Italian Rally Championship is also Andreucci’s home event, which he and co-driver Anna Andreussi won by 22 seconds this year, claiming eight of the 13 stages in their Peugeot Italia 207 S2000 and leading from start to finish. Andreucci is also Pirelli’s test and development driver, and on the Rally del Ciocco he used the tried and trusted RX7 rubber, which is specifically designed to find traction on slippery asphalt in low temperatures. The RE7 rain tyre and RX9 softer slick was also available in case of rain and mixed conditions, but the weather remained dry throughout the event. The Rally del Ciocco is one of the most demanding rounds of the Italian series as it takes in a huge variety of grip and surface changes as the stages climb high into the hills of the Garfagnana region. This year conditions were milder with temperatures of 15 to 16 degrees centigrade, but despite the inherent challenge of the roads, the Pirelli tyres performed brilliantly, enabling Andreucci to clinch an important victory. The Italian said: “This has been a fantastic and of course a very emotional victory as it’s fantastic to win in front of my family and friends on home territory. I started off at quite a conservative pace as the roads were very slippery and I was first on the road. It hadn’t rained for a long time, so there was a layer of dirt on the road, meaning that the grip was quite variable and the tyre wear was low. But we soon got the hang of the conditions and then we were able to build up our pace a bit and establish a margin over the others. The feeling with the cars and the tyres was very good: Pirelli has done an excellent job. ” Pirelli’s motorsport director Paul Hembery commented: “Once again Paolo did a fantastic job for us and took a memorable win on a rally that he has made his own. The nature of the Ciocco event is always extremely tricky, whether it rains or not, but whatever the conditions, our tyres are able to make the difference.” Alessandro Perico, also driving a Pirelli-equipped Peugeot 207 S2000, finished fifth on the Rally del Ciocco. As well as counting for the Italian Rally Championship, the Rally del Ciocco was also the opening round of the Trofeo Renault Italia and Italian Junior Championship – which is exclusively supplied by Pirelli this year and featured 20 entries in the highly competitive Clio R3. The category, along with the Junior award, was won by Sicilian driver Andrea Nucita. Pirelli also won the Production class thanks to Maurizio Angrisani in a Mitsubishi Lancer Evo X. The next round of the Italian Rally Championship is one of the most famous names in the history of the sport: the Rally Mille Miglia, based in Brescia from April 14-16. For more information about Pirelli, please contact Anthony Peacock on +44 (0)7765 896 930 or anthony@mediatica.co.uk