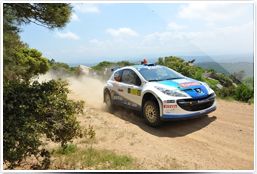 Italian Rally Championship leader and official Pirelli test driver Paolo Andreucci is celebrating after winning round three of the series: the 30th Rally Costa Smeralda, which finished in Olbia on Saturday evening (May 7). The five-time Italian champion, navigated as usual by Anna Andreussi, was driving the Peugeot Italia 207 S2000, with which he won the Italian title on Pirelli tyres last year. Despite the rough conditions on the punishing rock-strewn tracks, Andreucci and his Pirelli Scorpion gravel tyres proved untroubled. Based in Olbia on the north east coast of Sardinia, the event followed directly behind the World Rally Championship (WRC) Rally d’Italia Sardegna. This posed an added challenge for the Italian series drivers as they tackled the roads that had been churned up by the turbocharged four-wheel drive cars to create large ruts and reveal sharp stones. Protecting tyres in these conditions can be a tough test, but Andreucci found his Pirelli Scorpion rubber helped guide him through the treacherous roads without fail. “If you look at the first three stage times I am slower than the other drivers, but this was our strategy,” he said. “The first four stages are really rough so my plan was to get through stages one to three without damage, before changing to new tyres ahead of stage four, which was the most challenging on the cars.” The strategy worked perfectly for Andreucci with several drivers retiring on the longest stage of the event. They included Skoda Rally Team Italia’s Andreas Mikkelsen, who had been leading the event courtesy of several strong stage times before an impact damaged his Fabia Super 2000’s engine and forced him to retire. “The tyres performed exactly how I wanted them to… they didn’t let me down,” added Andreucci. Despite the rough conditions, Pirelli’s success was not a surprise to the company’s motorsport director Paul Hembery. He said: “Pirelli Scorpion tyres have an excellent record in marginal conditions, with the puncture rate of the control tyres supplied to the World Rally Championship between 2008 and 2010 equivalent to less than 0.02 per cent. “What is really interesting to see on this rally is that drivers using tyres from other manufacturers were forced to use reinforced rubber, which impacted on their performance.  The Pirelli Scorpion standard tyres are so good that Paolo completed the whole rally with his tyres undamaged.” Andreucci drove the first day of the rally, on the hard and rocky roads to the west of the island, on the harder compound Scorpion K2s before changing to medium compound K4s for the Saturday stages, which took place on the sandier roads to the north. Other leading Pirelli runners on the rally included Simone Campedelli, who drove his Citroen DS3 R3 to fifth place. Rally Costa Smeralda took place over eight stages and comprised a total of 138.58 competitive kilometres. Former winners of the prestigious Italian event include Markku Alen, Attilio Bettega, Henri Toivonen, Juha Kankkunen and Didier Auriol. Andreucci will resume his Italian championship on the Rally Targa Florio from June 5/6.