Peugeot Italia driver Paolo Andreucci claimed his sixth Italian Rally Championship title, the fifth one that he has taken with Pirelli, with another victory on the all-gravel San Crispino Rally in Italy. The Italian driver, who is also Pirelli’s test driver, has won all six rounds of the Italian Championship held so far – an unprecedented feat – to take his third consecutive championship with two rounds still left to go. 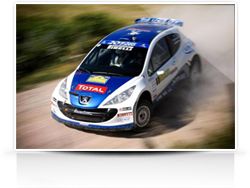 As well as flawless reliability from his car and excellent team work with his co-driver Anna Andreussi, the 46-year-old said that his Pirelli tyres formed a vital ingredient to his success on every surface. “We’ve experienced a huge mixture of conditions this year, from slippery asphalt to gravel, extremely hot temperatures to black ice, but despite these challenges, our Pirelli tyres have been absolutely fantastic all season, giving us the grip, traction and safety we needed to perform to the best of our abilities,” said Andreucci. “I feel that I’m driving better than I have ever done, and the Pirelli tyres give me the confidence to do that.” Once again, Andreucci took the lead at the very beginning of the event and held it all the way to the end to win by 43 seconds over the similar car of Andrea Aghini, claiming seven of the 10 stages. Andreucci was using Pirelli’s Scorpion gravel tyres, which feature similar technology to the covers seen on the World Rally Championship from 2008-2010, which enjoyed a failure rate of less than 0.02%. In the warm conditions of the San Crispino event, using gravel stages in Tuscany that previously formed part of the World Championship Sanremo Rally, Andreucci used the K tyre (for normal gravel surfaces) and the XR tyre (for abrasive surfaces). While gravel surfaces are never forgiving, Andreucci – who won his previous titles in 2001, 2003, 2006, 2009 and 2010 – experienced no problems whatsoever. “That’s actually been the story of the year,” said Andreucci. “We’ve had perfect reliability with the tyres even on the most demanding surfaces. It’s not a coincidence that in the three years we’ve been with Peugeot and Pirelli, we’ve won every time.” Pirelli also clinched the manufacturers’ title with Peugeot and the Group N title with Mitsubishi on the San Crispino Rally. Pirelli’s motorsport director Paul Hembery commented: “Paolo has created history with us by not only winning a sixth title – the fifth one that we’ve won together – but also by winning all the events held so far, which is a remarkable achievement. We’ve worked with some drivers who have dominated their respective fields in the past, but at the moment there’s nobody who can touch Paolo in Italy. As Paolo said, part of his unprecedented success is down to his tyres, which have shown astonishing durability and performance throughout the whole season. While we are in Formula One at the moment, we remain firmly committed to rallying and we wish Paolo well in what is undoubtedly his next goal: to win all the rallies of the year!” The next round of the Italian Rally Championship is the Rally del Friuli e delle Alpi Orientali from 1-3 September. For more information about Pirelli, please contact Anthony Peacock on +44 (0)7765 896 930 or anthony@mediatica.co.uk