Peugeot Italy’s Paolo Andreucci and co-driver Anna Andreussi have dominated the second round of the Italian Rally Championship with Pirelli, after also winning the opening round on his home territory of the Rally del Ciocco. 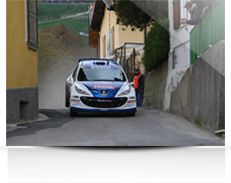 Round two was the all-asphalt Mille Miglia Rally based in Brescia: one of the most historic names in the history of the sport and also a round of the European Rally Championship and Renault Clio Trophy. Andreucci led the event from start on Friday to Saturday’s finish, using Pirelli’s PZero RX5 and RX7 tyres in uncertain weather conditions that included rain and even light snow. This tried and trusted tyre is specifically designed to find traction and grip even under the most challenging conditions. The reigning Italian Champion has plenty of experience of the Mille Miglia, an event which in the past was a historic road race won by legends such as Stirling Moss. Andreucci’s latest victory was in fact his fifth on the Mille Miglia, consolidating his lead of the championship. Andreucci, who is also Pirelli’s test driver, said: “This is a very important win for me, but I want to dedicate it first of all to my co-driver Anna Andreussi, who celebrated her birthday afterwards. It’s been a fantastic way to mark the occasion. This was a controlled win, which we were able to achieve without taking any unnecessary risks. Really we built the foundations of this victory on the opening day, which was damp and slippery. This made the tyre choice particularly crucial, but the PZero tyres gave us plenty of grip even under these difficult circumstances. On the second day, it was all about controlling our advantage, which we were able to do to the finish.” Pirelli also collected a clean sweep of all the other leading classes on the 35th Mille Miglia. Simone Campedelli won the junior and two-wheel drive classification at the wheel of a Citroen DS3 R3 (finishing 10th overall) while Maurizio Angrisani claimed the production class for the second consecutive time with 14th overall in his Mitsubishi Evo X on Pirelli tyres. Stefano Albertini won the Renault Clio competition, which uses Pirelli tyres exclusively. Pirelli’s motorsport director Paul Hembery commented: “Many congratulations to Paolo and Anna for their second consecutive victory, which underlines once more the strength and pure performance of our tyres, in some extremely challenging conditions. The fact that we won all the major classes as well, in such a prestigious event as the Mille Miglia Rally, also demonstrates the adaptability of our tyres to a wide variety of different vehicles: values that are also reflected in our range of Ultra High Performance tyres for the road.” For further information please contact Anthony Peacock on anthony@mediatica.co.uk or +44 (0) 7765 896 930.