Paolo Andreucci and Anna Andreussi dominated the 99th Rally Targa Florio, with their Pirelli-equipped Peugeot 208 T16. For Andreucci, it was not only his third consecutive win on the event, but the ninth of his career in Sicily, underlining his place in history on one of the most famous events in motorsport. 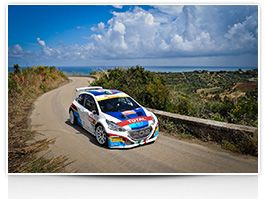 The Italian was delayed on Thursday night’s spectator superspecial with a broken gearbox (which was changed in record time by the Peugeot Italia mechanics). But his fightback to the top of the field took only a few stages, thanks to his intimate knowledge of the terrain and the exceptional performance from Pirelli’s RX asphalt tyres. At the beginning of each day Andreucci used the softer RX7B before moving onto the harder RX5D when it was warmer, in the afternoons. The Peugeot Italia crew won eight consecutive stages, ending the first leg with a margin of 36.2 seconds over their closest rivals. He was then able to build on this advantage all the way to the finish. Andreucci said: “With stages that were this difficult and demanding, it’s not easy to keep up the right pace. In one corner you would find slippery asphalt and then on the next one there would be plenty of grip, so it would have been very easy to make a mistake. With Pirelli, we did a great job: we managed to find an excellent balance between dealing with all these different surfaces, and not compromising all-out performance.” On the podium once more was the Pirelli-equipped Ford Fiesta of world championship star Sebastien Chardonnet, who won the opening stage of the Targa Florio. This was yet another significant result in the Frenchman’s first season of the Italian Rally Championship. Pirelli’s dominance extended to the two-wheel drive category, where the versatility of Pirelli’s RX5 tyre made it the default choice for cars driven through just the front wheels. Former European champion Luca Rossetti, co-driven by Matteo Chiarcossi, won two-wheel drive, the production class and the Renault Trophy in his Renault Clio R3T. The Pirelli-equipped Peugeot 208 R2 of Michele Tassone won the Junior class (for drivers under 25) following a tense battle with the similar car of Giuseppe Testa. Completing Pirelli’s success was a victory in the historic section, for Domenico Guagliardo in a Porsche 911 RS. With his second win from the last four rallies, reigning champion Andreucci has extended his lead of this year’s title race. The next round of the Italian Rally Championship will be on gravel in San Marino from July 10-12, but before then Andreucci will go up against the best drivers in the world, when he tackles the Rally d’Italia-Sardegna in two weeks time, with his usual Peugeot 208 T16 on Pirelli tyres. For further information please contact: Anthony Peacock • +44 7765 896 930 • anthony@mediaticaworld.com