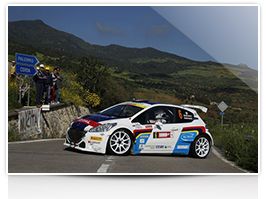 Peugeot Italia driver Paolo Andreucci has thanked Pirelli after a record eighth win on the Targa Florio: one of the oldest events in world motorsport, having first run as a road race in 1906. Now run as a modern rally, forming round three of the Italian Rally Championship, Andreucci led from start to finish over the 16 all-asphalt stages in Sicily. For the first time, he used Pirelli’s new RX7B tyre in warm conditions. This tyre helped to make the difference for Andreucci, co-driven as always by Anna Andreussi, who won 10 stages to claim the very first Italian Rally Championship victory for the all-new Peugeot 208 T16 R5. The effectiveness of this Pirelli tyre was also proved by Sicilian privateer Andrea Nucita. On the final afternoon he defeated the factory Skoda Fabia S2000 of reigning champion Umberto Scandola, to finish on the podium in a privately-run Peugeot 207 S2000. Pirelli was also successful in the Junior category, with Stefano Albertini in a Peugeot 208 R2 finishing seventh overall. The historic section was dominated by Pirelli as well, thanks to Lancia 037 driver Massimo Pedretti and the P7 Corsa Classic tyre. The RX7B is a soft-compound tyre originally designed for cool conditions, having already shown plenty of pace to finish on the podium at the season-opening Rally del Ciocco in March. Nonetheless, it showed itself to be equally competitive in the hot and slippery conditions of Sicily over the weekend, with asphalt temperatures around 40 degrees centigrade. Andreucci, whose victory ensures that Peugeot leads the manufacturers’ standings, said: “I’m very happy with the performance of the Pirelli tyres. They really helped us make the difference. Even when the conditions were warm, the RX7B showed plenty of durability and performance, enabling us to be very competitive in a car that is still extremely new. The package between the car and the tyres is one that works very well, thanks also to the work we did during this event” The roads close to Palermo have rarely been seen in such a slippery condition: the result of the recent lack of rain in the area. This left a layer of grease and dirt on the asphalt, commonly seen even in normal road driving. Yet the Pirelli tyres meant that all the Pirelli drivers could maintain perfect control on the event: a characteristic shared with Pirelli’s Ultra High Performance tyres for the road. Pirelli’s product manager Terenzio Testoni said: “Congratulations to Paolo and to Peugeot Italia for a fantastic performance but also to Andrea Nucita, who showed himself able to defeat a factory car with a private Peugeot 207 S2000 on Pirelli tyres. In every category – from R5 to R2 to historic – Pirelli has triumphed, and also at every level: both factory-supported and privateer. This underlines the quality of our products, which have proved to be capable of tackling a very wide range of conditions successfully. The RX7B was originally designed for cooler weather, but it showed itself to be just as competitive in the warm climate of Sicily.” The next round of the Italian Rally Championship is the Rally Italia Sardegna, which also forms part of the World Rally Championship, from 5-8 June.

For more information about Pirelli, please contact Anthony Peacock on +44 (0)7765 896 930 or anthony@mediaticaworld.com