Andreucci triumphs in Sanremo with Pirelli

After winning in Monte Carlo at the start of the year, Pirelli has also won the prestigious Rallye Sanremo, round 10 of the Intercontinental Rally Challenge. 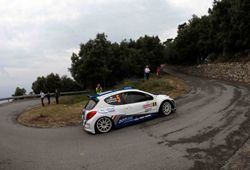 Paolo Andreucci, driving a Peugeot 207 Super 2000, triumphed today on the demanding asphalt event, held on narrow and twisty mountain roads in Italy's Imperia province from September 24-25. In addition to the testing terrain, Andreucci and Pirelli also had to master changeable weather conditions. While the rally finished in bright sunshine, rain fell over the rally route on Friday afternoon and again prior to the gruelling 44-kilometre Ronde stage, which took place under the cover of darkness on Friday night and is one of the longest used in international rallying. Armed with a supply of Pirelli's PZero tyres, Andreucci had little trouble negotiating the slippery mountain passes as he flew to victory alongside co-driver Anna Andreussi. A total of 32 Super 2000 cars were entered on the event: a record for Rallye Sanremo. "Our Pirelli tyres performed faultlessly in a hugely wide range of conditions," said Andreucci. "Whether it was damp or dry asphalt, we managed to have a consistent level of traction and grip, which was a key to victory. The flexibility of the Pirelli rubber meant that even when our tyre choice was not perfect, we were able to perform at our best. This goes to show the effectiveness of Pirelli's products under all circumstances. Everyone at Pirelli has worked very hard to refine the tyre specification, and this is the well-deserved result." Andreucci and Andreussi have reinforced their lead of the Italian Rally Championship with this latest victory and they are now in a position to lift the title on the next round, the Costa Smeralda Rally, in October. Unlike the World Rally Championship, which Pirelli supplies on an exclusive basis under a three-year agreement with the FIA, world motorsport's world governing body, IRC regulations permit open tyre competition. It means Pirelli is able to test its products against other rival manufacturers. And for the second time this season, Pirelli has beaten the opposition to follow up its victory on Rallye Automobile Monte-Carlo in January when Mikko Hirvonen took victory in a Pirelli-shod Ford Fiesta S2000. Pirelli also claimed two more Italian titles with a round to spare: the Italian Junior Rally Championship with Albertini-Fenoli (Renault Clio R3) and the Italian Production Car Championship with Perego-Pizzutti in a Mitsubishi Lancer Evolution. Terenzio Testoni, Pirelli's Motorsport Product Manager, concluded: "It's been another excellent performance from Pirelli in conditions that were far from easy. The opposition was stronger than it has ever been and conditions were extremely variable, but once again Paolo made the right choices to ensure yet more success for Pirelli."
Newsroom

Andreucci triumphs in Sanremo with Pirelli