Success for Cairoli and Herlings at the British Grand Prix with SCORPION™ MX tyres After all the rain and subsequent mud that indicated that Pirelli riders would be opting for the SCORPION™ MX MidSoft 32 Mud rear at the British Grand Prix, the eighth round of the FIM Motocross World Championship was run in perfect conditions and the SCORPION™ MX MidSoft 32 rear was the best choice for the breezy meeting just outside of Winchester. The recent death of his father meant that World Champion Antonio Cairoli was not in the best physical or mental shape for the race but was able to triumph again with first and second positions in the motos allowing the Sicilian to consolidate his lead in the MXGP standings and take his career tally up to 68 victories. From the following five riders that followed him in the classification the highest placed was Belgian Clement Desalle, in second, who was handicapped by a crash in the first moto to finish fourth and first. Third overall was Jeremy van Horebeek; the Yamaha rider taking his seventh podium finish in a row and was just ahead of South African Tyla Rattray. Pirelli dominated MX2 thanks to another triumph for defending champion Jeffrey Herlings with his fourth consecutive double. The Dutchman extended his margin in the series over Arnaud Tonus, in second place at Matterley and ahead of surprising teenager, Slovenian Tim Gajser (earning his first Grand Prix podium). Fourth overall was Herlings’ Red Bull KTM team-mate Jordi Tixier in spite of a broken hand. Pirelli also continued their success in European competition: Samuele Bernardini prevailing in the EMX300 class and maintaining control of the division just like Steven Clarke, who despite finishing fourth at his home event stays in possession of the EMX250 red plate. Round nine of MXGP will take place on June 1st at Saint Jean d’Angely for the Grand Prix of France. 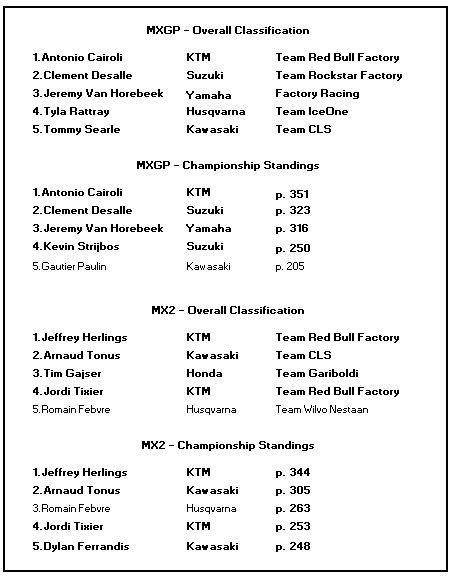