At Imola it's a double win for Jonathan Rea and a hat trick for Kawasaki in the eni FIM World Superbike Championship. Excellent début for the new Pirelli rear solution in the top category and new lap

In front of a crowd of 65,000 fans the manufacturer from Akashi wins the two Superbike races, the Supersport and the Superstock 600 races. In Superbike the new rear development solution in soft compound allows Pirelli to break the 2013 race lap record by more than half a second The fifth round of the World Superbike Season ended today with victory in both races in the top category going to Jonathan Rea (Kawasaki Racing Team). The Brit is on an impressive winning streak: out of the ten races held he has won eight and placed second in the other two. The weekend was satisfying for Pirelli as well, who introduced a new soft compound solution for the rear at the Imola circuit which proved to be the race tyre, confirming the Pirelli development team's expectations. 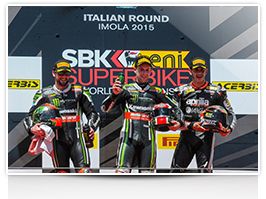 After a three round absence due to a bad crash during the opening race of the season in Australia, Davide Giugliano (Aruba.it Racing-Ducati SBK Team) came back keen to make up for lost time, winning the Superpole on Saturday ahead of the two Kawasaki riders, Tom Sykes and Jonathan Rea. There was an extremely fast pace in Race 1, thanks in part to the performance of the new DIABLO™ Superbike SC0 development tyre on the rear, the T0611 solution making its first appearance in the Championship. The new race lap record of 1'46.707 made by Tom Sykes (Kawasaki Racing Team) is further demonstration of this, improving the previous record (also set by Sykes in 2013) by more than half a second. Davide Giugliano (Aruba.it Racing-Ducati SBK Team) got off the line well ahead of Tom Sykes, temporarily overtaken by team mate Jonathan Rea (Kawasaki Racing Team) who moved into second place only to lose it a few turns later. During the eighth lap the other Ducati rider, Chaz Davies (Aruba.it Racing-Ducati SBK Team), was forced to withdraw due to an electrical problem with his bike. Things got really exciting in the ninth lap when Tom Sykes managed to overtake Giugliano to move into the lead. During the same lap Jordi Torres (Aprilia Racing Team – Red Devils) crashed out and in the tenth lap Jonathan Rea also managed to get by Davide Giugliano, chasing down team mate Tom Sykes. Just as the two Kawasakis ridden by Sykes and Rea were leading the race a bad crash, fortunately without any grave consequences, took David Salom (Team Pedercini) out of the race and forced the marshals to red flag the race and bring all the riders back into the pits. The race restarted according to the rules for 6 laps which was the 2/3 distance left in the race when the red flag came out. The restart had the riders on the grid in the order they were when the race was red flagged, so Sykes was on the pole ahead of Rea, Giugliano and Haslam. In the third lap of the restart Jonathan Rea overtook Tom Sykes to move into the lead. The two Kawasakis increased the gap ahead of Davide Giugliano (in third place) and crossed the wire first. Jonathan Rea took the top step of the podium followed by team mate Tome Sykes and Ducati rider Davide Giugliano who finished with an excellent third place. 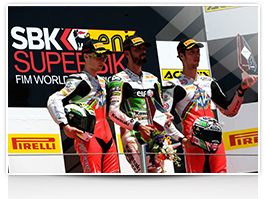 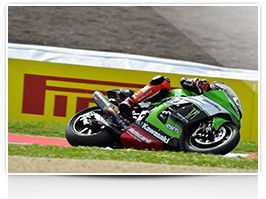 At Imola it's a double win for Jonathan Rea and a hat trick for Kawasaki in the eni FIM World Superbike Championship. Excellent début for the new Pirelli rear solution in the top category and new lap