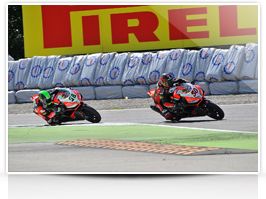 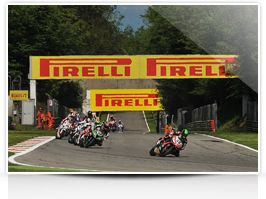 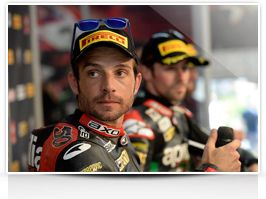 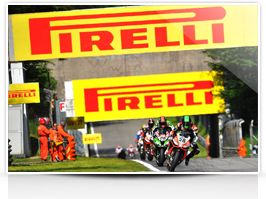 Thanks also to the progress Pirelli has made with the new 17 inch tyres, the Italian BMW rider and the English Kawasaki rider also achieved significant personal victories: Tom Sykes stopped the clock at 1’41.685 during Superpole on Saturday, breaking the circuit fastest lap record set by Max Biaggi in 2011, Marco Melandri, lapping in Race 1 at an average speed of 201,814 kph, is now the holder of the record for the highest ever average race speed in the history of the World Superbike Championship. 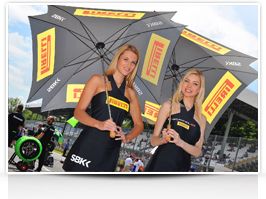 The rear SC0 solution, the softest in the Pirelli range which was available for racing for the first time this year, was used by all the Superbike and Supersport riders. In particular, if the power in Supersport is lower and therefore a softer blend can withstand the Brianza track, in Superbike this is the first time ever that an SC0 tyre has been used to race on this track. This is because the structure of the new 17 inch Diablo Superbike tyres allowed the Pirelli engineers to use softer compounds and therefore to provide the riders with the possibility of using the soft solution which is also the one capable of providing more grip, even on circuits like Monza which had been strictly off limits for this blend until now. 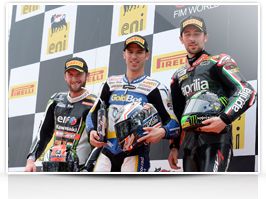 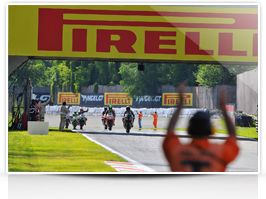 The new Diablo Superbike SC0 (S515) was not only the choice for all the Superbike riders, but it also contributed to reducing average lap times by 1 second in both race 1 and race 2. The quality of this solution allowed Marco Melandri to put the best race lap time on the board in the very last lap, more proof of this tyre's excellent performance in terms of mileage. In Supersport, in a race that had four starts, Sam Lowes (Yakhnich Motorsport) beat out Florian Marino (Kawasaki Intermoto Ponyexpress) and Lorenzo Zanetti (Pata Honda World Supersport). In the Superstock 1000 class Lorenzo Savadori and Team Pedercini put in a stellar performance. In the 600 class Nicola Morrentino took first place on his Yamaha YZF R6 for Team Trasimeno. The Pirelli solutions chosen by the riders: A key player in the fourth round of the eni FIM World Superbike championship was on the rear, both for the Superbike and the Supersport class, the SC0 solution, making its seasonal début this year. In Superbike the SC0 (S515) 17 inch Diablo Superbike tyre was quite popular with the riders thanks to its grip and the performance it provided on the Brianza circuit and for these reasons it was chosen by all 18 riders in both Race 1 and Race 2. Despite being a development SC0, the S515 differs from the standard version which Pirelli will bring to the next rounds only in the reinforced central compound, a measure that Pirelli successfully adopted that was necessary on a fast track like Monza in order to prevent possible blistering. On the front 15 out of the 18 riders opted for the Standard SC2 solution (R982) in both rounds, a solution that Pirelli had already brought to the first three rounds, excellent for high external temperatures because it guarantees solidity at the tread strip. Tom Sykes, Davide Giugliano and Ayrton Badovini preferred the standard SC1 solution (R426) over the SC2, in a softer compound. In Supersport as well the SC0 S510 development solution of the Diablo Supercorsa was the most popular among the riders for the rear, used in all four races. 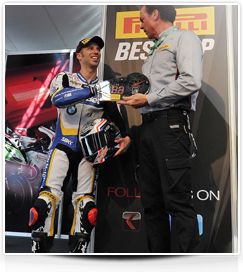 Pirelli Best Lap Award: In this round that Pirelli has always considered a "home" round, the usual “Pirelli Best Lap Awards” were also assigned. These are awards that the tyre manufacturer assigns to the riders who have made the fastest lap in Superbike race 1 and race 2, as well as the Supersport race. The winning riders in Superbike accepted the reward from the Pirelli Moto Business Unit Director, Uberto Thun, and from Racing Director Giorgio Barbier in the Paddock Show during the press conference at the end of race 1 and race 2 for the Superbike class. This year the award, which is always quite sought after by the riders, depicts a motorcycle instrument panel which indicates the time set by the rider. The Superbike and Supersport rider who has earned the most “Pirelli Best Lap Award” titles at the end of the season will be elected “Best Lap Winner: fastest rider of the year” and awarded in the usual end of year ceremony. Here are the Pirelli Best Lap Award winning riders at Monza from the fourth round of the season: WSB Race 1 – Tom Sykes (Kawasaki Racing Team), 1'42.229 (5th lap) WSB Race 2 – Marco Melandri (BMW Motorrad GoldBet SBK), 1'42.379 (18 th lap) WSS – Lorenzo Zanetti (Pata Honda World Supersport): 1’48.225 (3rd lap) The overall standings after the first three rounds are as follows: WSB: Tom Sykes (Kawasaki Racing Team): 3; Eugene Laverty (Aprilia Racing Team): 2; Michel Fabrizio (Red Devils Roma): 1; Chaz Davies (BMW Motorrad GoldBet SBK): 1; Marco Melandri (BMW Motorrad GoldBet SBK): 1.WSS: Kenan Sofuoglu (MAHI Racing Team India): 1; Sam Lowes (Yakhnich Motorsport): 1; Fabien Foret (MAHI Racing Team India): 1; Lorenzo Zanetti (Pata Honda World Supersport): 1 Comment from Giorgio Barbier, Pirelli Moto Racing Director: “This was truly a great weekend because all the Championship class races were extremely heated, but also because, for the class that we are most concerned with, the solutions designed with the new 17 inch tyres worked very well, especially the rear SC0. If, in past years, racing in Superbike with a soft compound like the SC0 on a track like Monza which is particularly aggressive and demanding on the tyres was unthinkable, this year the development of the new Diablo Superbike tyres allowed us to use softer blends from the start and the SC0 at Monza was even the solution used by all the riders. As if this wasn't enough, with this solution Marco Melandri also broke the highest average race speed record and the riders lapped an average of 1 second per lap faster compared to 2011. I think that the race results, with three riders from 3 different motorcycle manufacturers battling it out down to the finish and the Best Lap, made by Marco Melandri in the last lap, can only confirm just how high the quality and performance level reached by our new tyres is. Last but not least, I would like to congratulate Marco Melandri, Eugene Laverty, Tom Sykes and Sylvain Guintoli for the exciting show they put on, but also Lorenzo Savadori and Team Pedercini for an exceptional race and Sam Lowes' podium, as well as team Yakhnich Motorsport for the result in Supersport”. The 2013 Pirelli statistics for the Monza round: • Total number of tyres Pirelli brought: 4895 • Number of solutions (dry, intermediate and wet) for the Superbike class: 6 front and 6 rear • Number of solutions for the Supersport class (dry, intermediate and wet): 4 front and 5 rear • Number of tyres available for each Superbike rider: 37 front and 36 rear • Number of tyres available for each Supersport rider: 25 front and 27 rear • Temperature in Race 1: air 20° C, asphalt 38° C • Temperature in Race 2: air 24° C, asphalt 47° C • Maximum race speed reached by Pirelli Diablo Superbike tyres: 336 km/h, Marco Melandri (BMW Motorrad GoldBet SBK), Sylvain Guintoli (Aprilia Racing Team) and Michel Fabrizio (Red Devils Roma) in Race 1 respectively at 16th, 15th and 8th laps and Eugene Laverty (Aprilia Racing Team) and Marco Melandri (BMW Motorrad GoldBet SBK) in Race 2 respectively at 17th and 18th laps. • Maximum race speed reached by Pirelli Diablo Supercorsa tyres in Supersport: 289,8 km/h, Gabor Talmacsi (Prorace), 2nd lap.