At Nürburgring wins for Sykes and Davies and further confirmation in Superbike for the Pirelli standard SC0 tyre at the rear, Sam Lowes mortgages the Supersport title with his Yamaha YZF R6 shod with

In the home round the manufacturer of the spinning propeller dominates thanks to Davies and Melandri’s performances but the Englishman from Kawasaki winning race 1 leads the championship standings, bypassing the Aprilia rider Sylvain Guintoli by one point 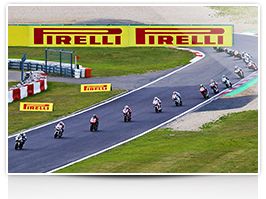 The new 17-inch Pirelli Diablo Superbike rear tyre in SC0 compound, which saw its debut at Monza, is unquestionably the first choice of Superbike riders should occur asphalt temperatures occur sufficiently low to allow the tyre to work correctly. At the Nürburgring, we have had further confirmation of that when in Race 1, with an air temperature of 14 degrees and of 21 for the asphalt, all the riders opted for the soft solution not only finishing the race without any problem of wear but also researching the performance and running strong until the end, allowing improvements of around one second per lap on race time in comparison to the past years. In Superbike Tom Sykes (Kawasaki Racing Team) in Race 1 is got the highest step of the podium, behind him the two riders of BMW Motorrad GoldBet Superbike team, Marco Melandri and Chaz Davies, respectively second and third at the finish line. Sylvain Guintoli (Aprilia Racing Team), who was leading the championship before this round, is forced to settle for fourth place. In Race 2, the BMW British rider takes its revenge on his compatriot from Kawasaki, in fact Chaz Davies obtains the first placement in front of Eugene Laverty (Aprilia Racing Team) and his team-mate Marco Melandri. With four rounds to go before the end of the Championship Tom Sykes returns to the top of the overall standings with 287 points bypassing the Frenchman on the Aprilia, Sylvain Guintoli (286), by one point. Marco Melandri (BMW Motorrad GoldBet SBK) follows the leader with a gap of 30 points and Irishman Eugene Laverty closes the quartet of eligible candidates for the title with 247 points. Despite the excellent performance demonstrated today a recovery of Chaz Davies (BMW Motorrad GoldBet SBK) seems more difficult, he currently holds the fifth position with a gap of 66 points from the championship leader. In Supersport the British Yakhnich Motorsport team rider, Sam Lowes, makes his Yamaha YZF R6 - shod with Pirelli Diablo Supercorsa SC1 - run fastest, taking out a strong mortgage on the world title as he now boasts an advantage of 54 points on Kenan Sofuoglu (MAHI Racing Team India) when there are only 3 races to go and a maximum of 75 points available. The Turkish rider took comfort winning his third Pirelli Best Lap Award. The Pirelli solutions chosen by the riders: When temperatures permit, and this was the case of the Nürburgring today, the Diablo Superbike standard SC0 (R1261) tyre remains the preferred solution by all the riders for the rear and the fact that on this occasion it has been chosen by all the riders lined up on the grid was a further confirmation of how this tyre can fit very well on the motorcycles from different teams meeting the needs and the different riding styles of Superbike riders. The SC0 standard is the softest solution of the range which debuted at Monza with the reinforced central area has been used at Donington, Portimão, Imola and now here with success. This slick solution has a soft compound, ideal for tackling smooth asphalt and high temperatures but can be used, as has already happened, even when track temperatures do not exceed 20 degrees. It offers, in fact, maximum tread contact on smooth asphalt and maximum traction development at high temperatures as well as higher resistance to thermal performance decay. At the front the new development SC1 (S283) has found a good appreciation. It has been designed to ensure greater robustness and has been chosen by 12 of the 20 riders at the start, while almost all the other riders opted for the standard SC1 (R426). 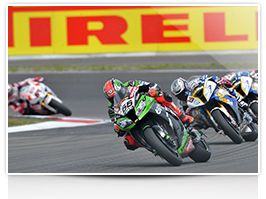 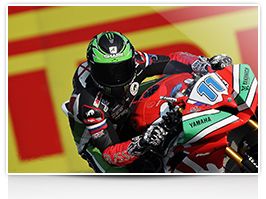 In Supersport teams and riders preferences for the rear went to the new development SC1 (R1591) which debuted at Silverstone and offers greater resistance to cold tearing but equal grip of the standard SC1, for the front instead the majority of the riders opted for the standard SC1 (P1177). Pirelli Best Lap Award: The Pirelli Best Lap Awards, the prize that is assigned to the riders with the fast laps in the Superbike and Supersport races, were presented by Sales & Marketing Director DACH Michael Müller, by Trade Marketing and Events Manager Germany Tina Hetzel and by Racing Manager Germany Bjoern Lohmann in the Paddock Show during the press conference that follows the podium at the end of Superbike race 1 and race 2 and the Supersport race. 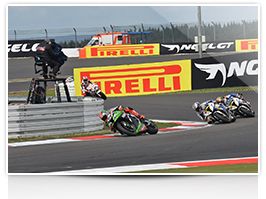 The Superbike and Supersport rider who has earned the most “Pirelli Best Lap Award” titles at the end of the season will be elected “Best Lap Winner: fastest rider of the year” and awarded during the end of year ceremony. At the moment Tom Sykes leads the Superbike standings with 8 awards. In Supersport Sam Lowes is the leader with 4 best lap awards. Comment from Giorgio Barbier, Pirelli Moto Racing Director: "The weekend started with the nice wet superpole achieved yesterday by Ayrton Badovini, his first career pole in the Superbike class and the second for the Ducati Panigale after the one obtained by Checa at Phillip Island. All in all signals of encouragement for the manufacturer from Borgo Panigale, that this year is facing a difficult time. Too bad that in the race Ayrton was not able to fight for the podium but anyway congratulations for the excellent result of Saturday. Today we have witnessed two great races, now it seems clear that Tom Sykes is the favourite for the title this year but surely Marco Melandri, Eugene Laverty and Sylvain Guintoli will give him a hard time till the end of the Championship so it’s better not to take anything for granted. Speaking of tyres, for the rear once again the standard SC0 was the solution of the weekend being adopted by the unanimity of the riders lined up on the grid in both Superbike races. For us these are important points of feedback, the soft solution continues to be very flexible and able to get on track with temperatures that are not particularly high, here at the Nürburgring for example the track temperature never exceeded 22 degrees. This means that we have made significant progresses, with a SC0 working very well with temperatures not particularly high and a SC1 that is able to cover almost the whole range of use of SC2. As far as last year would have been unthinkable to run with the SC0 with a 20 degrees asphalt temperature, now we can easily say that with only two solutions, the SC0 and SC1, next season we will be able to basically compete on all circuits while the hardest solution, the SC2, will remain available for the minor championships because of the excellent performance/durability ratio they can guarantee. I conclude by making a wish for a speedy recovery to the unfortunate Jonathan Rea and Leon Camier, we hope to see them soon back on track " The 2013 Pirelli statistics for Nürburgring round: • Total number of tyres Pirelli brought: 4462 • Number of solutions (dry, intermediate and wet) for the Superbike class: 5 front and 6 rear • Number of solutions for the Supersport class (dry, intermediate and wet): 4 front and 4 rear • Number of tyres available for each Superbike rider: 33 front and 34 rear • Number of tyres available for each Supersport rider: 23 front and 22 rear • Temperature in Race 1: air 14° C, asphalt 21° C • Temperature in Race 2: air 20° C, asphalt 31° C • Maximum race speed reached by Pirelli Diablo Superbike tyres: 279.8 km/h, in Race 1 by Marco Melandri (BMW Motorrad GoldBet SBK) at 15th lap. • Maximum race speed reached by Pirelli Diablo Supercorsa tyres in Supersport: 257.1 km/h, Kev Coghlan (Kawasaki DMC-Lorenzini Team), 1st lap.

At Nürburgring wins for Sykes and Davies and further confirmation in Superbike for the Pirelli standard SC0 tyre at the rear, Sam Lowes mortgages the Supersport title with his Yamaha YZF R6 shod with
Newsroom