At Silverstone, British and French Superbike riders take best advantage of the new Diablo Superbike development SC1 tyres, in Supersport Sam Lowes and Kenan Sofuoglu battled together supported by the

With track temperatures between 22 and 26 degrees and variable weather to make races even more difficult, new SC1 solutions developed by Pirelli for the two classes have demonstrated excellent performances even on wet and slippery asphalt 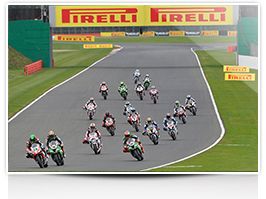 The Silverstone round mixed even more rider cards in the overall standings of the eni FIM Superbike World Championship classes. Superbike Race 1 was dominated by British riders Jonathan Rea (Honda World Superbike Pata) who gets the highest step of the podium for the first time this year followed by the Northern Irish rider Eugene Laverty (Aprilia Racing Team) in second place plus Leon Camier (Crescent Fixi Suzuki) who brought his Suzuki GSX-R1000 for the first time on the podium this year. Race 2 was instead the prerogative of the French riders with the Kawasaki Racing Team rider Loris Baz who confirmed to be very strong on the Silverstone circuit in which last year he had previously triumphed. Behind his compatriot Jules Cluzel (Fixi Crescent Suzuki) and Eugene Laverty (Aprilia Racing Team), who is unable to replicate the performance of Race 1 but still grabs the podium. 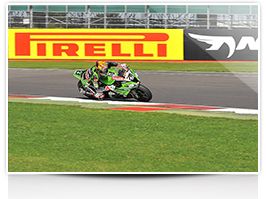 Remaining overall leader Sylvain Guintoli (Aprilia Racing Team), who despite not reaching the podium, wins both Pirelli Best Lap Award of the weekend, recording also the track lap record held since 2010 by Cal Crutchlow- also thanks to the performance of the new Pirelli Diablo Superbike 17 inch tyres. Aprilia Racing’s Frenchman now leads the overall standings with 262 points, followed by Tom Sykes (Kawasaki Racing Team) on 249 who in England failed to match the pace of the front runners, and by Eugene Laverty (Aprilia Racing Team) on 226. In fourth place Marco Melandri (BMW Motorrad GoldBet SBK) with 221 points, while the fifth place is disputed between Chaz Davies (BMW Motorrad GoldBet SBK) and Loris Baz (Kawasaki Racing Team) both on 180. Honorable mention goes to the Italian Michel Fabrizio (Red Devils Roma) who as he joined the track in Race 1 exceeded 200 races run in the eni FIM Superbike World Championship. 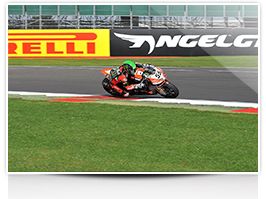 In the Supersport class Kenan Sofuoglu (MAHI Racing Team India) overclassed the local idol Sam Lowes (Yakhnich Motorsport) on the last lap after a hard-fought race, his team-mate Fabien Foret got the third position. With this success the turkish Kawasaki rider is now at 29 points from the Englishman, who with his Yamaha YZF R6 leads the standings with 160 points, in third place and farther the Frenchman Fabien Foret at 101. The Pirelli solutions chosen by the riders: The stated goal of Pirelli at the Silverstone round was to verify the effectiveness of two new SC1 solutions developed for the rear, one for the Superbike class and one for Supersport, comparing them with the respective solutions in the range. In the specific case of Superbike the comparison was between the standard SC1 R828 and the new R1431, in Supersport between the R303 of range and the development solution R1591. In both classes the two new rear development solutions have been used by about 90% of the riders on the starting grid, as a demonstration that, at least in this round, the developments and changes made to the compound have offered superior performances compared to those of the current range. At the front the choice of the riders in both classes was split almost equally between the SC1 and the SC2 standards, confirming that the choice of the front tyre depends much more on the riding style of each rider. In principle the SC1 tends to maximise tread contact on the ground and the “presence” of the front, while the SC2 is the solution favoured by the more aggressive riders who prefer a compact tread band. Pirelli Best Lap Award: WSB Race 1 – Sylvain Guintoli (Aprilia Racing Team), 2'05.513 (4th lap) WSB Race 2 – Sylvain Guintoli (Aprilia Racing Team), 2'05.083 (2nd lap) WSS – Sam Lowes (Yakhnich Motorsport), 2’08.027 (3rd lap) The overall standings after the first nine rounds are as follows: WSB: Tom Sykes (Kawasaki Racing Team): 7; Eugene Laverty (Aprilia Racing Team): 3; Chaz Davies (BMW Motorrad GoldBet SBK): 2; Sylvain Guintoli (Aprilia Racing Team): 2 ; Michel Fabrizio (Red Devils Roma): 1; Marco Melandri (BMW Motorrad GoldBet SBK): 1; Jonathan Rea (Pata Honda World Superbike) : 1 WSS: Sam Lowes (Yakhnich Motorsport): 4; Kenan Sofuoglu (MAHI Racing Team India): 2; Fabien Foret (MAHI Racing Team India): 1; Lorenzo Zanetti (Pata Honda World Supersport): 1 Comment from Giorgio Barbier, Pirelli Moto Racing Director: "Silverstone was a very intense weekend with 8 races held over the two days, of which 7 were on Sunday with weather that certainly did not help and delayed the start of Race 1. This of course required a major commitment from our technicians in our working area since they mounted and dismounted from the rims with perfect timing thousands of tyres, so I want to thank them all for the excellent work done both here and in all rounds raced so far. Talking about the races it was important for us to understand both the Superbike and Supersport performances of the two development SC1 specs compared to those of the range used in the two classes. In Superbike both in Moscow and also in Silverstone the development SC1 has been shown to offer something extra in terms of performance compared to the standard SC1. In Supersport the alternative solution to that of the range and brought by Pirelli for the first time ever right here, gained the preferences of all riders. Respectively 2 and 1 races are not enough for us to establish whether these two development SC1s are actually better than those which are currently in the range, we will bring both to other rounds this year in order to acquire additional data and if what we have seen so far is confirmed, then the R1431 and R1591 could become the new SC1s for the range next year. Congratulations to Jonathan Rea and Leon Camier for the result in Race 1, which certainly served to cheer up their teams after some races without podiums and to the Frenchmen Loris Baz and Jules Cluzel who together with Eugene Laverty battled in Race 2. Also compliments to Sylvain Guintoli for the double Best Lap Award win and for having scored the new lap record held by Cal Crutchlow since 2010”.