The unpredictable weather and an asphalt temperature of 19°C convinced the riders to opt for medium compound rear solutions such as the standard SC1, on the front the majority went with the standard SC2 and the U0176 SC2 development solution 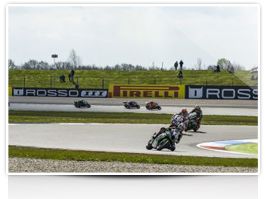 The race held a few moments ago at the TT Circuit Assen in the Netherlands was a particularly exciting one. In fact, Race 1 in the MOTUL FIM World Superbike Championship marked the fourth win of the season for reigning World Champion Jonathan Rea (Kawasaki Racing Team), but this time, unlike the other races, the Northern Irishman had to battle all the way to the final corners to take the victory. The rain that fell on the track on Friday and in the early hours of Saturday forced the riders to use wet tyres almost exclusively and for this reason, without any real points of reference for Race 1, various tyres were selected although the asphalt temperature of 19°C convinced the riders to opt for medium compound rear solutions such as the standard SC1, whereas on the front the majority went with the standard SC2 and the U0176 SC2 development solution. It seemed like it would be a promising race for Tom Sykes (Kawasaki Racing Team) as well after he took his third Superpole of the season in the morning (the first two were at Phillip Island and Motorland Aragón) and the thirty-third of his career. However, unfortunately for the Akashi-based manufacturer's rider, his luck did not hold out for the race. When the red light went off Sykes got off the pole well, with his teammate and Chaz Davies (Aruba.it Racing – Ducati) close behind, followed by Sylvain Guintoli (Pata Yamaha Official WSBK Team) and home town hero, Dutchman Michael Van der Mark (Honda World Superbike Team). 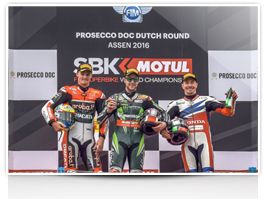 Already in the second lap the 2013 World Champion was forced to yield the lead to teammate Jonathan Rea and in the meantime a leading trio was formed of the two Kawasaki riders and Ducati rider Chaz Davies. Farther back, about one second behind, Guintoli, Van der Mark and Nicky Hayden gave chase. Van der Mark set off to chase down the podium, overtaking Guintoli and in the meantime, during the fourth lap, Davies got the better of Sykes and then Rea, moving temporarily into the lead. In the sixth lap Rea went wide, allowing Sykes and Van der Mark to get by, slipping back into fourth place. There were five riders from three different manufacturers all within just over a second. Davies on Ducati, Sykes on Kawasaki, Van der Mark on Honda, Rea on Kawasaki and Hayden on Honda. The Dutchman decided that he was not going to settle for the podium and in the eighth lap he overtook Sykes, moving into second place. On the next lap the Brit braked too late and went long, hurling his bike disastrously into the gravel and ending his race prematurely. At the start of the 17th lap, Van der Mark made his move on the first corner to overtake Rea, who retaliated a bit later to take back the position. At the end of the same lap, Rea attempted to get the better of Davies, but his efforts were thwarted and he was forced to fend off the Dutchman again in order to hang onto second place. A three-way battle began to decide the podium. During the 18th lap, Rea overtook Davies who was relegated to second place and then forced to yield another position to Van der Mark's Honda. 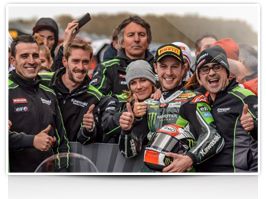 The Dutchman had his sights set on the top step of the podium at all costs and in the 19th lap he moved into the lead, overtaking Rea, but then he went long and the Northern Irishman took it back. The young Dutch rider's dreams were shattered during the penultimate lap when he crashed out, sending his bike hurling toward the safety barriers. Rea and Davies battled down to the last corner for the top step of the podium, with the Ducati rider at just 2 tenths behind the Kawasaki and Hayden clinching third place more than 2 seconds farther back. It was Rea who won the race with a 1.6 second advantage over Davies and 5.3 seconds ahead of Hayden, who rode to his very first Superbike podium finish. Leon Camier also had an excellent result astride his MV Agusta, finishing in fourth place 15 seconds behind the winner. Race 1 standings: 1) Jonathan Rea (Kawasaki Racing Team) 2) Chaz Davies (Aruba.it Racing – Ducati) 3) Nicky Hayden (Honda World Superbike Team) 4) Leon Camier (MV Agusta Reparto Corse) 5) Jordi Torres (Althea BMW Racing Team) 6) Lorenzo Savadori (IodaRacing Team) 7) Markus Reiterberger (Althea BMW Racing Team) 8 ) Alex Lowes (Pata Yamaha Official WSBK Team) 9) Román Ramos (Team GoEleven) 10) Lucas Mahias (Pedercini Racing) The Pirelli solutions chosen by the riders for Race 1: In Race 1 the riders rode into the unknown with little to no points of reference since, in the sessions held on Friday and Saturday morning, they were forced to use mainly wet tyres. This explains why almost all the DIABLO™ Superbike solutions that Pirelli brought to this round were used in the race. The most popular solution on the front was the standard medium, the SC2, but may riders also chose its development version, the U0176, both solutions that were able to provide the riders with better stability and riding precision than the SC1 could have. On the rear, most of the riders used the standard SC1, the most natural choice when the SC0 cannot be used due to rather low temperatures. Those who did not use this solution resorted primarily to the U0989 SC1 development tyre, including today's race winner, Jonathan Rea. 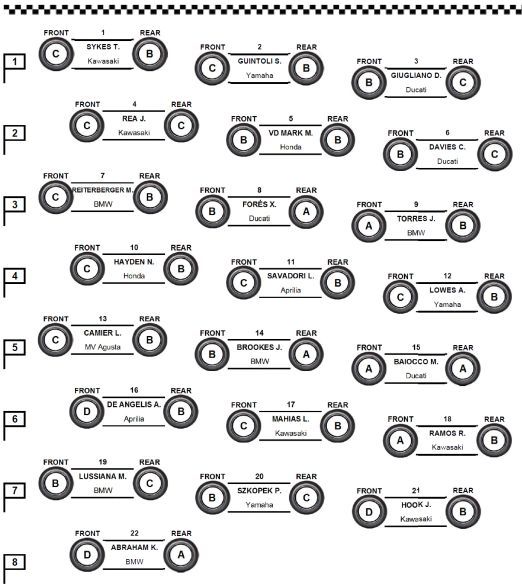