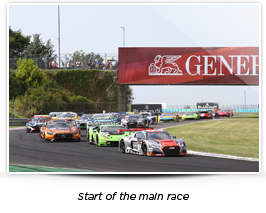 Hungary’s round of the Pirelli-equipped Blancpain GT Series Sprint Cup was won by the WRT Audi crew of Marcel Fassler and Dries Vanthoor, who stamped their authority on the 60-minute main race, having started from pole following success in Saturday’s qualifying race. The main race was extremely closely-fought, with the top six cars covered by less than three seconds heading into the final lap. In an action-packed encounter that was also affected by a safety car, Fassler took the start to hand over to his team mate shortly after the pit stop window opened.

There was then an epic fight to the finish, with the winning Audi narrowly beating the second-placed similar car of Jake Dennis and Peter Schothorst, while the Lamborghini of Christian Engelhardt and Mirko Bortolotti completed the podium.

The Blancpain GT Sports Car Club title was also assigned at the Hungaroring, with Anthony Pons claiming the honours in his Mercedes, with one round still left to go. 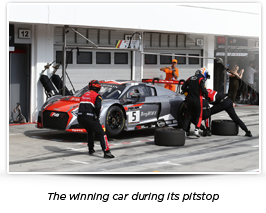 Matteo Braga (Pirelli circuit activity manager):“As is often the case during this time of year at the Hungaroring, temperatures were extremely hot all weekend. Despite these demanding conditions, the P Zero DHD tyres worked perfectly, delivering maximum performance throughout their stint. The Hungaroring is a track that works tyres hard, as the cars are constantly cornering, with only one real straight. This also means that opportunities for overtaking are limited, so success in the qualifying race was a key to winning the main race, along with a perfectly executed pit stop strategy. The winning Audi managed to achieve that, but the race was still extremely close, with the consistency of the lap times among all the manufacturers underlining how well the balance of performance, along with the tyres, are working.”

Marcel Fassler (Number 3 Audi R8 LMS):“When I joined the series, there was a lot for me to learn – including the tyres – but I think this shows the progress that we are making now. There are some very good drivers here and I feel that we’re closing in on the frontrunners. It’s not been the easiest year for us up until this weekend, so I’m absolutely delighted with the result: a big thanks to everyone.” 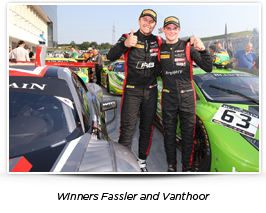 Fact of the day:The 4.381-kilometre Hungaroring, located close to Budapest, was the very first race circuit to be built specifically for Formula 1 behind what was formerly the Iron Curtain, in 1986. Since then, it’s been on the F1 calendar every year. It joined the Blancpain GT Series schedule last year, when the race was won by Mercedes.

Number of the day:Three. This is the number of times that 41-year-old Marcel Fassler from Switzerland, today’s race winner, has won the famous Le Mans 24 Hours: in 2011, 2012, and 2014. On each occasion, it was with Audi. However, today was his first win in a Blancpain race: his previous best result was fourth in Zolder, Belgium.