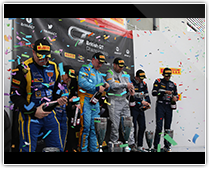 Phil Keen and Jon Minshaw led Barwell Motorsport and the Lamborghini Huracan GT3 to victory in round five of the British GT Championship in the GT3 class. Named the Silverstone 500, this round was different to other British GT races, with endurance key as all classes completed a single three-hour race. As always, Silverstone placed high demands on the tyres through its famous fast corners including Copse as well as Maggotts and Becketts. Due to heavy rain at the start, the entire grid began on the Cinturato WH tyre, but with the track drying and just an hour to go, some teams moved onto slicks, the P Zero™ DHC tyre for the GT3 category and the DH tyre for GT4, which seemed to be the best option. Jonathan Wells, Pirelli British GT race engineer, said: “The WH performed very well with the majority of teams completing the first two hours on a single set of tyres, and the slicks performed as well as expected in the cool and damp conditions in the last third of race.” 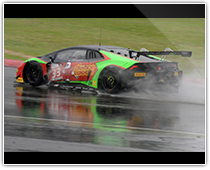 The race started under the safety car due to the poor weather conditions and it was a close fought race, but Keen and Minshaw eventually took the win in their Lamborghini after a series of incidents, meaning the safety car was in place for large parts of the race.