Giandomenico Basso has taken his fourth win on the Mille Miglia Rally in Italy, round two of the Italian Rally Championship, and the first asphalt win for the Ford Fiesta Regional Rally Car. The Regional Rally Car version of the Fiesta is a detuned version of the World Rally Car, with a smaller inlet restrictor for the turbo and other modifications to limit performance. Based in Brescia, the all-asphalt Mille Miglia – which also counted for the European Rally Championship – was characterised by mixed conditions from the opening superspecial on Thursday night. Friday’s eight stages were also held in largely wet weather, while the final day on Saturday was drier. Basso, driving his first event in the new Fiesta run by the A-Style team, took the initiative from the very beginning, winning five of the eight stages on Friday using the Pirelli RX9 tyre. This is the softest compound of the RX family of tyres, which is able to generate grip even in the most slippery conditions – even though it is not a full wet pattern. However, competitors are allowed to cut the tyre to help disperse even more water and debris. Three more stage victories on Saturday ensured that Basso, a two-time European Champion, eventually won the rally by 1m18s from reigning Italian champion Paolo Andreucci, also on Pirelli tyres. Basso used the RX9 tyres again in the morning before moving onto Pirelli’s RX7 tyres on Saturday, a slightly harder compound, which nonetheless worked extremely well in the cold and damp conditions. “It was a rally where the tyres played an absolutely critical role,” said Basso at the finish. “Partly through my own experience of the event, and partly through the excellent advice I had from Pirelli, we always seemed to be on the right tyre – we never made a bad choice at any rate – and I put that down to the versatility of the RX pattern in a very wide variety of conditions. This was not an easy rally at all, and I was still learning the car, so I was very impressed with the performance of the tyres from start to finish, which played a big part in this excellent result.” Snow had fallen in the region during the week leading up to the rally and there were still traces of snow by the side of the road on the second day of the 256-kilometre event, as temperatures hovered around freezing point. Pirelli’s product manager Terenzio Testoni commented: “On the opening day, the RX9 proved to be extremely competitive both in the wet and in the dry, while on Saturday the cars still had to deal with a damp surface due to the surrounding snow. This was one of the most challenging Mille Miglia events in recent history, which is why we are so pleased to claim a Pirelli one-two on this legendary name in motorsport. Congratulations to Giandomenico, but also to Paolo – who was the only Super 2000 car to get close to the Regional Rally Car’s pace.” Michele Tassone has also taken Pirelli into the lead of the Junior Championship, with a class victory in his Renault Twingo R2. Stefano Albertini was equally impressive during his first rally at the wheel of a Peugeot 207 S2000: an initiative made possible by a joint venture between the CSAI (the Italian motorsport federation) and Pirelli. Albertini finished sixth overall, making no mistakes on his debut in treacherous conditions, and will drive the car again on at least three other Italian Championship events this year. The Italian Rally Championship switches to gravel next, with the 19th Rally dell’Adriatico from 17-19 May. Having won the opening round this year, Andreucci continues to lead the series with his Pirelli-equipped Peugeot. For more information about Pirelli, please contact Anthony Peacock on +44 7765 896930 or anthony@mediatica.co.uk 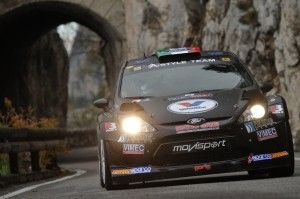