*Pirelli’s DHE tyres return home for the first round of the GT World Challenge
*GT2 class – with more power but less downforce than GT3 – makes its debut
*Nine manufacturers, 29 teams, and more than 125 drivers to take part in the main race

Milan, April 14, 2021 – The Monza circuit in northern Italy will play host to the opening round of the 2021 GT World Challenge Europe eason, with a full grid of GT3 teams and drivers set to do battle in the first Endurance Cup race of the year.

A total of 29 teams across nine different manufacturers will contest the season: each car equipped with Pirelli tyres over the course of 10 rounds (five Sprint Cup and five Endurance Cup) that make up the GT World Challenge Europe series.

Pirelli is exclusive tyre supplier to the series for the 11th consecutive year, with the

After making its debut last year, the Pirelli P Zero DHE will again be the tyre of choice for GT3 competitors in 2021. The DHE is an evolution of its predecessor the DHD2, with modifications to ensure it is even more versatile for the wide variety of GT3 cars and drivers using it in competition. This is the go-to dry weather tyre for all teams and cars in the series, in a single compound.

The Cinturato WH tyre remains the wet weather compound. All the tyres have been designed to work with a variety of car set-ups and drivers, delivering maximum performance in all conditions. Just as the P Zero road car tyres deliver the ultimate performance for the road, making them the preferred choice for the majority of supercar manufacturers.

The GT4 cars will once again use the P Zero DHB: a brand-new tyre last year, which is directly derived from Pirelli’s GT3 product to better cope with the rapid evolution and increasing competitiveness of the GT4 category, numbering 47 cars at Monza.

Pirelli’s circuit activity manager Matteo Braga said: “Last year, we introduced the new range of tyres that we developed for GT3 and the results were very satisfying. We found that they produced the desired level of performance, reliability, consistency and adaptability for all the cars, despite the wide variety of vehicle architectures, equalised through the balance of performance. Monza is always a special circuit for us: our home track with high speeds and heavy braking that place big demands on the tyres. The weather at this time of year is often quite unpredictable as well. In much the same way as GT3, the tyres developed and introduced for the GT4 cars will also be in their second season this year, so we expect to see the same consistency across an even wider range of cars, which are ever-closer to the performance levels of GT3.”

New and familiar faces up for the fight

There are 44 cars entered for the opening round of the year at Monza, with last year’s overall winners AKKA ASP keen to kick off its title defence with a pair of Mercedes-AMG GT3s, spearheaded by Raffaele Marciello, Jules Gounon and Dani Juncadella. Sprint Cup champions Team WRT (Audi R8 LMS GT3), Porsche, Lamborghini, Bentley and McLaren are sure to add to the competition.

In the Endurance Cup, Ferrari will be aiming to repeat its success of 2020, through its new factory supported team Iron Lynx.

Aston Martin returns to GT World Challenge Europe with Garage 59 team, as well as BMW with Walkenhorst Motorsport in the Endurance Cup.

This weekend will also feature the inaugural round of the new-for-2021 GT2 European Series, a two-class series reserved for GT2 machinery. GT2 European Series is open to Pro-Am and Am drivers and will be exclusively supplied by Pirelli tyres throughout the season. Competing cars range from the Porsche 911 GT2 RS Clubsport, the Audi R8 LMS GT2, KTM X-BOW GT2 and an adapted Lamborghini Huracán Super Trofeo.

The main race takes place on Sunday April 26 at 15:00 for three hours, after a test day on Friday followed by free practice and qualifying on Saturday. The GT4 European Series will feature two hour-long races on Saturday and Sunday.

The new-for-2021 GT2 European Series will host two 50-minute races on Saturday and Sunday, as will the one-make Lamborghini Super Trofeo Europe series. Both series are also equipped exclusively with Pirelli tyres. 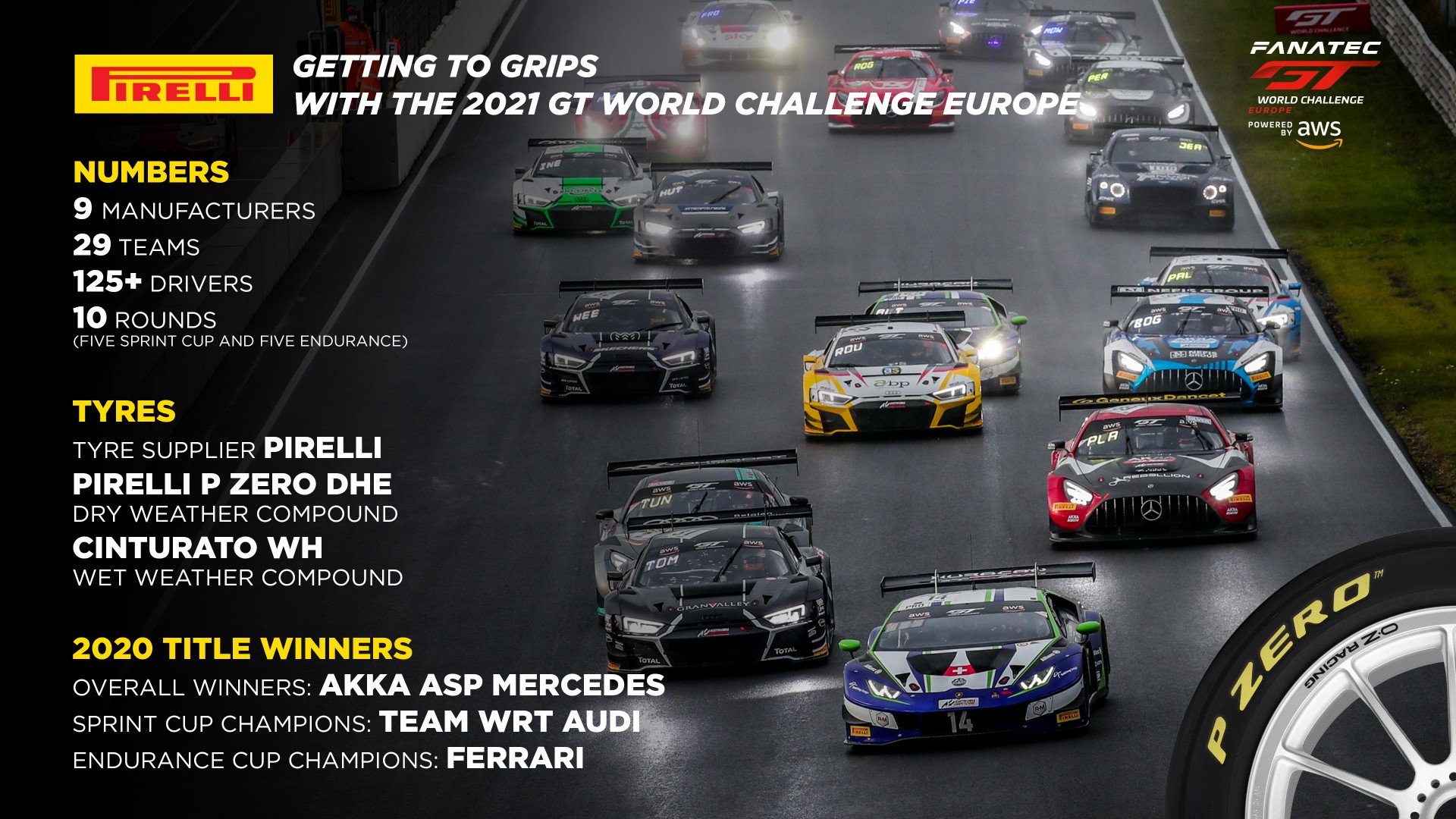