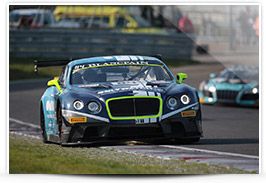 The Bentley Continental GT3 has claimed its first major championship using Pirelli tyres: the Blancpain Sprint Series, which is exclusively supplied by the Italian manufacturer. The Bentley clinched the Sprint Series drivers’ title in Holland last weekend thanks to drivers Maximilian Buhk and Vincent Abril, run by Bentley Team HTP from Germany. The car was built by M-Sport, with which Pirelli also sealed the European Rally Championship last weekend. Buhk and Abril secured the title with a win at the series finale in Zandvoort, clinching victory – and the championship – by just three-tenths of a second from Audi. The dramatic end to the race underlines the ferocious competition that has been a hallmark of the Blancpain series all year. Only two years after the Bentley first took to the track, it has now already claimed one of the most prestigious titles in GT3 racing, where the cars all run on identical Pirelli tyres despite a wide range of vehicle architectures permitted within the class. With up to 12 manufacturers represented on the Blancpain Series – which includes both endurance and sprint rounds – the task for the single tyre supplier is extremely challenging and varied, as the products have to work effectively within very different car designs and race distances. As well as the sprint events, for example, the Pirelli GT tyres are also used for the Spa 24 Hours: one of the highlights of the Blancpain season and Pirelli’s biggest sporting engagement of the year. One of the things that most of the competing manufacturers on the Blancpain series have in common is the fact that they use Pirelli tyres as original equipment on their road cars: including Bentley. In fact, the Bentley Bentayga – the fastest SUV in the world – was the star of the recent Frankfurt Motor Show in Germany, wearing bespoke Pirelli P Zero tyres, as Pirelli has 100% fitment on this exciting new model. Making up for the loss of the Sprint title at Zandvoort was the fact that Audi R8 driver Robin Frijns claimed the overall Blancpain GT title, made up of the sprint and endurance rounds combined. The endurance category was already won by Nissan drivers Alex Buncombe, Katsumasa Chiyo and Wolfgang Reip at the Nurburgring last month. Pirelli senior tyre engineer Matteo Braga commented: “Congratulations to Bentley for sealing the title at a very dramatic final race, with the drivers coming into the Zandvoort weekend eight points behind in the standings. This is indicative of the extremely close competition we have seen all year between the world’s premium manufacturers, which is what makes this championship so appealing both to ourselves as Ultra High Performance tyre specialists, and to the public who love to see exciting races between very different cars. The sprint title was fought between Bentley and Audi: two diverse machines, showing that our product is adaptable to a variety of vehicles and that is easy to get the best performance from it.” Pirelli recently renewed its exclusive supply contract with the Blancpain GT Series for a further five years, meaning that it will supply both the endurance and sprint championships at least to the end of 2020.