Biaggi back in front after Nürburgring dramas unfold

Max Biaggi (Aprilia Racing Team) once more heads the points table in the eni FIM Superbike World Championship, after two races in Germany laden with incident and frequent accidents for the top two championship runners. Biaggi won race one in impressive style, taking his 21st career win and his fifth of the year. In race two Chaz Davies (ParkinGO MTC Team Aprilia) won his first ever SBK race and in doing so became the eighth rider to take a victory in what is proving to be a remarkable 2012 season. Official Tyre Supplier "This year, unlike in 2011, the Nürburgring track provided a weekend of decidedly pleasant temperatures which favoured some particularly spectacular races. With just two rounds left in the World Superbike season, the Championship is still wide open and anything could happen with 5 riders astride bikes from 5 different manufacturers, all mathematically still within a shout of the title. Realistically, however, the circle is closing in around Max Biaggi (Aprilia Racing Team), Marco Melandri (BMW Motorrad Motorsport) and Tom Sykes (Kawasaki Racing Team). The weekend just ended was definitely a favourable one for the Aprilia Racing Team factory bikes and the satellite Aprilia ridden under the ParkinGo MTC Racing colours, which managed to pull off a historic hat-trick in Race1 and a one-two in Race 2. My congratulations to them for a job well done. Leon Camier and the Fixi Crescent Suzuki team also put in a noteworthy performance, taking an important third place in Race2. As regards the tyres Pirelli provided for the riders this round, it is interesting to see how all 3 solutions which were brought for the rear (1 SC0 and 2 SC1) were used in both Race1 and Race2, with an overall preference for the P1060, the reference 2012 SC1 which is also available on the market for end users. Pirelli also obtained two important victories today in the racing world which we are very proud of: the MX1 Motocross World Championship with Tony Cairoli and the MX2 Championship with Jeffrey Herlings, which bring the number of titles the Milan-based manufacturer has won in this discipline to 58. On top of this there is the success achieved in the 24 Hour Le Mans with the Kawasaki SRC team which repeats the Bol D’Or victory from April, allowing Pirelli to win the Masters of Endurance, the only non control tyre world motorcycle championship, in confirmation or our supremacy over our competitors." -Giorgio Barbier, Racing Director Pirelli Moto Pirelli BEST LAP Awards: SBK Race 1 – Max Biaggi (Aprilia Racing Team), 1'55.267 (Lap 3) SBK Race 2 – Carlos Checa (Althea Racing), 1'56.148 (Lap 4) Total BEST LAP (SBK): Checa C. (Althea Racing): 7, Biaggi M. (Aprilia Racing Team): 5; Melandri M. (BMW Motorrad Motorsport): 4; Sykes T. (Kawasaki Racing Team): 3; Guintoli S. (Team Effenbert Liberty Racing): 1; Baz L. (Kawasaki Racing Team): 1; Ayrton Badovini (BMW Mottorad Italia Goldbet): 1; Leon Haslam (BMW Motorrad Motorsport): 1 WSS – Sam Lowes (PTR Honda), 2' 00.222 (Lap 12) Total BEST LAP (WSS): Lowes S. (Bogdanka PTR Honda): 3; Foret F. (Kawasaki Intermoto Step): 2; Parkes B. (Ten Kate Racing Products): 2; Cluzel J. (PTR Honda): 2; Lanzi L. (Prorace): 1; Morais S. (Kawasaki Lorenzini): 1 STK1000 – Sylvain Barrier (BMW Motorrad Italia GoldBet), 1’58.994 (Lap 5) STK600 – Michael VD Mark (EAB Ten Kate Junior Team), 2'02.736 (Lap 7) Marco Melandri (BMW Motorrad Motorsport) lost the championship lead he had worked so hard for in the previous round in Russia when he fell in both 20-lap races. The second crash happened while he was leading. Biaggi had already crashed on the first lap of race two but restarted to battle back to take what may well be three important points. The event in Germany brought forward a number of firsts, all of which unfolded under brilliant blue skies and sunshine in front of a weekend crowd of 46,000 spectators. 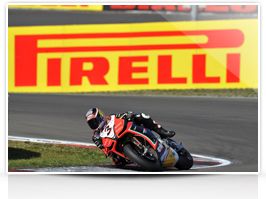 Aprilia riders went 1-2-3 in the opening race for the first time ever. British rider Leon Camier (FIXI Crescent Suzuki) gave his team its first podium finish of the season with a fine third place in race two. Second place rider in each race was Eugene Laverty (Aprilia Racing Team) taking his first double podium for the Italian manufacturer. Davies’ race win gave riders from the UK a combined victory total of 118 in individual SBK contests, joining the USA and Australia on the same record total of 118 victories each. In the championship Biaggi now has 381 points, Melandri 308.5 and Sykes 291.5, making the fight for the overall title closer between the top three yet again, with only 26.5 points separating them all. Two rounds and four races remain, with everything to play for. Race 1 In the first race Biaggi pulled off one of his coolest and most assured wins to re-take the lead in the championship fight. His victory came after he took the lead from a slowing Tom Sykes (Kawasaki Racing Team), and before the end of the 20 laps both Laverty and Davies had also passed Sykes, making it a 1-2-3 for riders on Aprilias. Camier was a battling fifth after a last minute glitch on the starting grid, while Melandri crashed out on lap six. 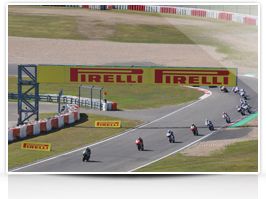 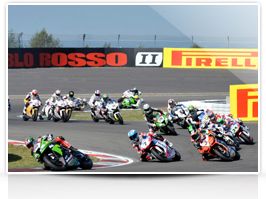 Max Biaggi: “It’s just a happy moment to be here. The result is the best that we can do, so we can be proud of all the work we did during the weekend. We keep improving the bike especially in the set-up. Overall I could ride well, even though it was slippery basically I could set good lap times. Sykes impressed me with his pace in the first half, and finally he started to lose concentration and maybe grip and I could take him and keep my lap time.” Results: 1. Biaggi (Aprilia) 20 Laps/102.740 km in 38'52.751 average 158.553 kph; 2. Laverty (Aprilia) 3.027; 3. Davies (Aprilia) 3.127; 4. Sykes (Kawasaki) 12.306; 5. Camier (Suzuki) 14.131; 6. Guintoli (Ducati) 19.523; 7. Haslam (BMW) 27.017; 8. Zanetti (Ducati) 33.116; 9. Badovini (BMW) 34.937; 10. Aoyama (Honda) 39.132; etc. Race 2 Davies claimed his and his team’s first win with an impressive display of eventual front-running, winning by over three seconds and easing up, after top contenders Melandri and Biaggi found the gravel traps. In a festival of points for British and Irish riders, Laverty was second, and a great ride from Camier saw him recover from a less than perfect start to go third, only losing second place to a late push from Laverty. Jonathan Rea (Honda World Superbike Team) was fourth, and one-time race leader Sykes was fifth. Biaggi recovered to finish 13th, half a minute down on the winner. 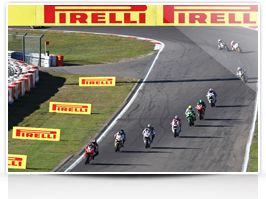 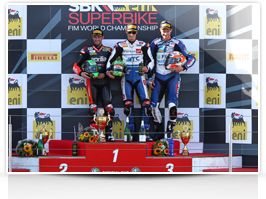 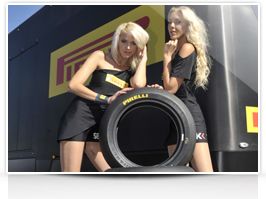 Biaggi back in front after Nürburgring dramas unfold
Newsroom

PIRELLI PARTNERS WITH THE ROGUE RACING AND THEORY GLOBAL ENDURO TEAMS, TAKES ITS GRAVITY PROTOTYPE TYRES TO THE DH WORLD CUP AND EWS
PIRELLI AND ENEL X TO BRING RECHARGING INFRASTRUCTURE FOR ELECTRIC VEHICLES TO DRIVER TYRE CENTRES
PIRELLI: THE PIRELLI CALENDAR RETURNS, BRYAN ADAMS TO SHOOT THE 2022 EDITION
For the WorldSBK round in Misano, Pirelli brings new front and rear solutions, whilst the SCX tyre debuts in the WorldSSP class
OGIER AND THE PIRELLI SCORPION KX OVERCOME THE ROUGH ROADS OF SARDINIA
2021 Azerbaijan Grand Prix – Sunday