BOARD OF PIRELLI & C. SPA APPROVES CONSOLIDATED RESULTS FOR THE YEAR ENDED 31 DECEMBER 2014

The company recalls that on February 12, 2015 it released to the market preliminary data for 2014. The present communique as well as reporting the same economic indicators already announced in February, includes new elements, such as net profit and dividends, approved by today’s meeting of the Board of Directors. 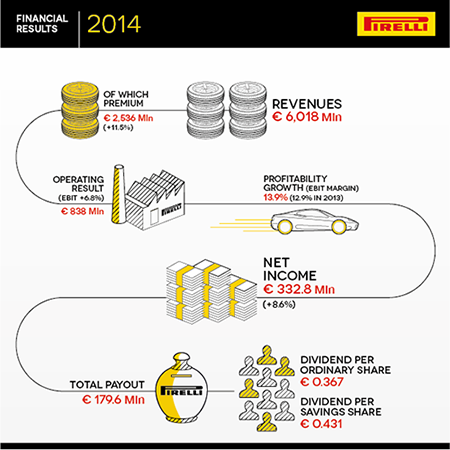 •        TOTAL REVENUES FORECAST TO GROW BY +6%/+6.5% TO APPROX. 6.4 BILLION EURO DERIVING FROM: -         VOLUME GROWTH EXPECTED AT EQUAL TO OR ABOVE+3%. PREMIUM WILL BE THE DEVELOPMENT DRIVER WITH A RATE OF VOLUME GROWTH EQUAL TO OR ABOVE +10% -         PRICE/MIX GROWTH AT EQUAL TO OR ABOVE +4% -         FOREX IMPACT AT ABOUT -1% •        CASH GENERATION BEFORE DIVIDENDS OVER 300 MILLION EURO BEFORE STEELCORD DISPOSAL CAMFIN – CHEMCHINA OPERATION With regard to the operation announced by Camfin and ChemChina – without prejudice to the valuations which, on the basis of the applicable laws, the independent directors and board of directors will be called upon to make regarding the public tender offer when it is launched – the Board of Directors takes note of the friendly nature of the operation, the characteristics of which – on the basis of that which has been made public – are consistent with the strategy in the Industrial sector which already foresaw paths of growth and aggregation in geographically strategic areas like Asia. *** As a consequence of the underwriting of the agreement to sell 100% of the steelcord activities, that business has been classified as a “discontinued operation” and the reclassified results are in the accounts under the heading “results of disposed operating activities”. The economic indicators relative to 31 December 2014 thus refer to the activities in function and the comparative data of 31 December 2013 have been restated. The 2014 targets – previously indicated using a like-for-like perimeter – have been rectified, excluding the steelcord contribution and are now >€6.0/<6.1 billion for revenues and c. €840 million for EBIT. The Board of Directors of Pirelli & C. SpA met today to review and approve results for the year ended December 31st, 2014. The year’s performance, which saw growth in the main economic indicators, was characterised in particular by:

BOARD OF PIRELLI & C. SPA APPROVES CONSOLIDATED RESULTS FOR THE YEAR ENDED 31 DECEMBER 2014