Irishman Craig Breen has claimed his first victory in the FIA WRC Academy Cup on ADAC Rallye Deutschland, round four of the Pirelli-backed series that aims to nurture the next generation of rally champions. To put the spotlight firmly on talent, all the drivers use identical Ford Fiesta R2s running on Pirelli tyres. 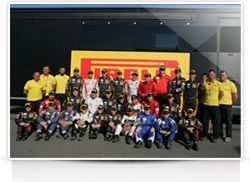 Germany was the very first asphalt round of the series, following three gravel rallies that were won by Estonia’s Egon Kaur. The 24-year-old opted for a cautious approach in order to safeguard his championship advantage, while it was the Spaniard Yeray Lemes who blasted into a half-minute lead on the opening day of the Trier-based event, which was characterised by mixed weather conditions. This made the tyre strategy even more crucial than usual, with the drivers having to select which of their P Zero RX5 tyres (for dry conditions) and P Zero RE7 tyres (for wet conditions) to use over the course of the day. In total, each driver received an allocation of 18 RX tyres and 12 RE tyres for the rally (with a maximum of 20 allowed to be used for both the pre-event test and the rally in total). A key part of their learning programme lies in working out how best to use their tyres and allocation: this was the first time that the Academy drivers had a tyre choice, as normally they are supplied with just one type. Before the rally the drivers benefitted from a tutorial session hosted by Pirelli senior engineer Matteo Braga – who taught them some of the fundamental principles about how to choose different tyres for different conditions. With plenty of uncertainty about the grip levels on the opening day of the event, these were valuable lessons. On the second and final day of the rally, run in the woodland areas of the Saarland region and over the notoriously abrasive concrete roads of the Baumholder military ranges, Lemes lost the lead after going off for nearly a minute on stage eight, promoting Craig Breen, one of the six Pirelli Star Drivers this year, into the rally lead. Over the remaining six stages, the two fought hard for victory – with Breen eventually winning by 15.1 seconds. Italian Pirelli Star Driver Andrea Crugnola was third. Kaur’s eighth place was enough to ensure that he retains the overall series lead with two rounds left to go. Breen used the hard compound RX5 throughout the 283-kilometre event, but took two RE7 soft compound tyre as spares to cut through standing water on Friday if necessary. Pirelli’s Racing Manager Mario Isola commented: “The first asphalt round of the season has resulted in an interesting reversal of some of the form that we saw earlier this year. Having struggled a little bit on gravel, the asphalt specialists came into their own on this event and we saw some excellent drives. But even the asphalt here is hardly typical of the asphalt seen on most events: the surface is extremely rough and dirty, making it hard for drivers to find a natural rhythm, and this wasn’t helped by the weather conditions. Our tyres performed well throughout the rally in these tough conditions, and even more importantly, I think all the drivers learnt a lot here this weekend.” Pirelli is the official tyre supplier to the entry-level class, which pitches 16 young hopefuls together on six WRC events on asphalt and gravel. They drive identical Ford Fiesta R2s prepared by the British M-Sport organisation in Poland. The WRC Academy Cup resumes on Rallye de France, an all-asphalt event based in Alsace from 30 September-2 October. *** For further information contact: Anthony Peacock +44 7765 896930 anthony@mediatica.co.uk