On the dry asphalt the Englishman with Kawasaki Racing Team took Superpole on Saturday and won Race 1. In Race 2 the pouring rain gave the Pata Honda World Superbike Team rider an advantage and in Supersport Dutchman Michael Vd Mark took his fourth win of the season. 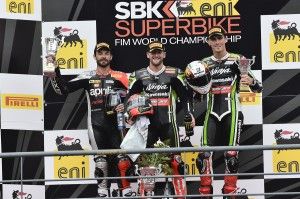