The reliability of Pirelli’s race tyres has been highlighted in world-class endurance racing once again as the final round of the Blancpain Endurance Series culminated with a win for HTP Mercedes at the Nurburgring over the weekend. Germany’s Maximilian Buhk secured a home victory alongside fellow countrymen Maxi Gotz and Bernd Scheider as Buhk was crowned the 2013 Pro Cup champion. Pirelli supplied its tyres to the Blancpain Endurance Series throughout 2013: a five-round endurance racing championship that encompasses a wide variety of teams representing different manufacturers such as Ferrari, Mercedes and Audi. As well as supporting Blancpain, Pirelli also supplies the FIA GT Series and has been the proud sponsor of an award to the top-placed team contesting both championships. 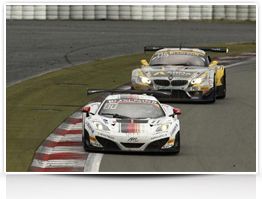 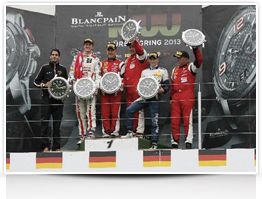 The German trio Buhk, Gotz and Schneider a enjoyed the dominant race for much of the weekend but a last minute decision to change the brake pads on their Mercedes SLS AMG GT3 cost them the lead to their title rivals, the Marc VDS Racing Team consisting of Maxime Martin, Yelmer Buurman and Bas Leinders. For the remainder of the race, Buhk pushed to get back in front and eventually shot ahead of Martin on the Veedol chicane. The fight went down to the final lap before Martin was eventually forced to settle for the runner-up spot in his BMW. Third place went to the ART Grand Prix McLaren where former Formula 2 champion Andy Soucek was joined by Antoine Leclerc and Mike Parisy in a McLaren MP4-12C.  Previous championship leaders Daniel Zampieri, Cesar Ramos and Davide Rigon had a spate of bad luck in their Kessel Racing Ferrari after incurring a drive-through penalty and an on-track incident. Winning the Pro-Am category was the Russian trio of Kirill Ladygin, his younger brother Anton and Victor Shaitar. The team converted their pole position to enjoy a comfortable final two hours and seal the win in their Ferrari 458 Italia. However, it was Lucas Ordonez who won the overall Pro-Am drivers’ championship. The original winner of the GT Academy initiative finished eighth in the Pro-Am class, along with team-mates Wolfgang Reip and Peter Pyzera. It was a double celebration for the Nissan GT Academy Team RJN squad as they were also crowned team champions. The Gentlemen Trophy class was won by the Sport Garage Ferrari 458 Italia entry of Venezuela’s Justino Azcarate and French duo Eric Cayrolle and Bruce Lorgere Roux. Pirelli’s senior engineer Matteo Braga, who was trackside at the Nurburgring, concluded: “We have witnessed some incredibly close racing at each of the five rounds of the Blancpain Endurance Series this season and we couldn’t have asked for a more exciting finale. The race could have ended very differently after Buhk, Gotz and Scheider went into the pits to make some changes but Buhk did a tremendous job of fighting back and thoroughly deserved to finish in the top spot. The trio looked after the car and tyres well and of course their result was helped by a good qualifying session. We experienced some changeable weather over the weekend with some sun followed by light rain but the teams remained on Pirelli slicks throughout the race. Once again, Pirelli has shown the world that it can supply tyres to various premium manufacturers and is reliable across a range of high performance machinery. We have very much enjoyed being involved with the Blancpain Endurance Series this year and look forward to returning as the official tyre supplier for the 2014 season.”