Works KTM champ clinches his 7th world title and the 60th for Pirelli in Motocross World Championship It was an exciting day for Antonio Cairoli and Pirelli who were crowned World Champions again after the first moto of the British Grand Prix. Thanks to his margin of 90 points in the standings accumulated over the previous fifteen rounds, the 27 year old Sicilian - steering the factory KTM 350SX-F with Pirelli Scorpion MX MidSoft 32F front and Scorpion MX MidSoft 32 rear - wrapped up his fifth crown in a row by defeating closest rival Clement Desalle. 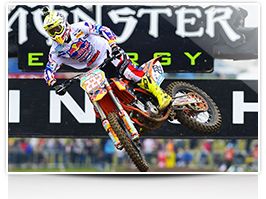 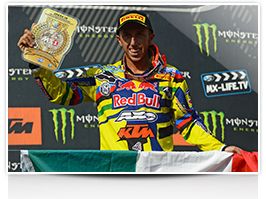 Cairoli wasn’t able to repeat the victory at Matterley Basin in the second moto due to some technical troubles after ‘abusing’ his KTM machine in the championship celebrations a few hours earlier. Nevertheless Cairoli was able to sign-off a consistently excellent season and with his seventh career title became the second most successful rider in the history of the sport behind Belgian Stefan Everts. The Grand Prix was won by works Suzuki star Desalle; following up his second position in the first moto with the chequered flag in the second and scaled the podium ahead of team-mate Kevin Strijbos. A title victory for Pirelli was also celebrated in MX2. 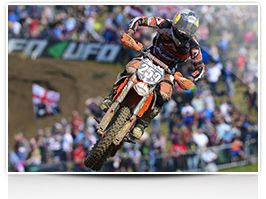 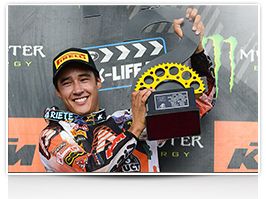 Jeffrey Herlings had already claimed the championship in the Czech Republic two meetings ago but the injured Dutchman saw his country’s flag still on top after Glenn Coldenhoff toasted his maiden GP triumph in the UK. Valentin Guillod finished third in the European EMX250 Championship and maintains a 12 point lead in the competition with one round remaining. The seventeenth and last event of the season will take place on the 8th of September at Lierop (Holland). 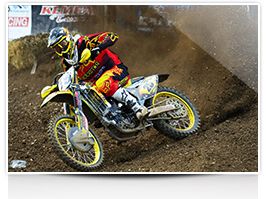 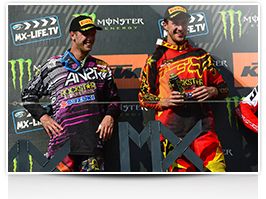