Pirelli’s GP2 season has drawn to a close with the Italian tyre manufacturer supplying its medium P Zero slicks at the 2011 Abu Dhabi GP2 final, which crowned James Calado and Tom Dillmann winners of the Pirelli GP3 Award. During Pirelli’s debut year as the official tyre supplier to Formula One’s feeder series, GP2 and GP3, the Italian tyres have covered more than 400,000 racing kilometres at 14 of the most challenging circuits in Europe and the Middle East, with approximately 25,000 tyres used throughout the season. 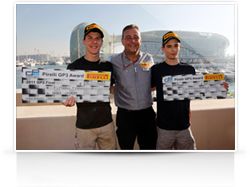 Pirelli has enjoyed a very successful debut season as sole tyre supplier to Formula One’s main feeder categories, GP2 and GP3, which form a vital part of Pirelli’s motorsport strategy. Giving opportunities for young drivers to make the most of their talent has always been a priority for Pirelli. In fact, the Italian tyre manufacturer has already supported up-and-coming rally stars through the Pirelli Star Driver programme, which took place in the Pirelli-backed FIA WRC Academy this year.
In line with its commitment to young talent, Pirelli rounded off its GP2 season by rewarding the top two GP3 graduates who finished in the points in the 2011 Abu Dhabi GP2 Final. James Calado (Lotus ART) scored a total of seven points: one point in the Feature Race and six points in the Sprint Race. Having won the second race he received Pirelli’s top prize of 15,000 euros. The runner-up prize of 10,000 euros was awarded to Tom Dillmann (iSport International) who also claimed a total of seven points (three in the Feature Race and four in the Sprint Race) after finishing third on Saturday.
Pirelli’s Racing Manager Mario Isola commented: “On behalf of all our staff, I’d like to congratulate James Calado and Tom Dillmann for having shown some fantastic performance throughout the weekend and winning the Pirelli GP3 Award. Six GP3 graduates were seen on track over the weekend running for the first time on a GP2/11 car equipped with our P Zero GP2 medium slicks. With experience being a fundamental element in such a competitive series, I’m glad to say they all did very well, competing against a number of experienced GP2 drivers.”
“The GP2 Final has been a very interesting event as it featured a good mix of GP3 and GP2 graduates as well as several young drivers with a different background. In both races, the top positions were filled by GP2 graduates who dominated the action, also thanks to the tyre management skills acquired during the Pirelli-backed season. In fact, those drivers who knew how to look after their tyres over the final laps had a big advantage over the rest of the field. With a lifetime of about 20 laps for the medium rubber and high longitudinal loads impacting the rear tyres, tyre management proved once again to be the key to success,” concluded Mario Isola.
James Calado said: “I’m extremely grateful to Pirelli for giving me this fantastic award, which has come out of the blue and at exactly the right time. Racing here was an amazing opportunity, and to have the result that I did couldn’t have been any better. It’s perfect way to end the season and it means that I can approach 2012 with plenty of confidence.”
Tom Dillman added: “Abu Dhabi is an amazing circuit and it was great to have this experience, especially to come away with this award at the end of it. We had a really close race and I learned a lot, which is the most important thing at this level. I’d like to thank Pirelli for this great prize.”
Pirelli’s P Zero GP2 tyres will be seen on track next season when the GP2 Series will have some new tyre regulations designed to bring it closer to Formula One. Pirelli’s GP3 tyres will instead be seen at two tests before the end of the year: in Valencia from 23-24 November and then in Jerez from 1-2 December.
***
For further information please contact Laura Bartoli on +44 7500 877 304 or laura@mediatica.co.uk
Newsroom