The Ducati riding Welshman paints the EuroSpeedWay Lausitz red in his attempt to slow Jonathan Rea's escape in the championship lead, success in WorldSSP300 for Italian Alfonso Coppola whereas in the STK1000 class it's the third win of the season for Michael Ruben Rinaldi

The ninth round of the MOTUL FIM World Superbike Championship has also been filed away. The undisputed protagonist of the weekend at the German EuroSpeedWay Lausitz circuit was undoubtedly Ducati rider Chaz Davies (Aruba.it Racing – Ducati) who, winning both Race 1 on Saturday and Race 2 on Sunday, brought home to Borgo Panigale a splendid brace, bringing his total number of wins this season to six.

In Race 2, the Welsh Ducati rider finished ahead of current Championship leader Jonathan Rea and teammate Marco Melandri. Despite two second place finished this weekend, the defending World Champion from the Akashi-based manufacturer has an advantage of more than 105 points over Davies and has therefore limited the damage.

The races in the other categories also went well: in WorldSSP, winning with the team Kallio racing Yamaha was South African Sheridan Morais, while in the Supersport 300 World Championship it was Italian Alfonso Coppola who triumphed astride his team SK Racing Yamaha YZF-R3. Lastly, the win went to Michael Ruben Rinaldi in the European FIM Superstock 1000 Cup.

The Pirelli results were also outstanding. Over the course of the weekend, the brand with the long "P" gave the riders the means to break various track records. In fact, today Chaz Davies set the new race fast lap record with a time of 1’36.634.
For the German round, the most used solutions were the medium compound tyres, both on the front and on the rear. In particular, in the WorldSBK class, the protagonist of the weekend on the rear was the W0051 SC1 development solution that was used by almost all the riders in both races.


In Race 2, Kawasaki riders Jonathan Rea and Tom Sykes also decided to fall in line with the rest of the riders on the grid, putting a medium compound tyre on the rear. It was a good start for Marco Melandri (Aruba.it Racing – Ducati) from the first spot on the grid, with Xavi Forés (BARNI Racing Team) falling in behind him. In the meantime, Jonathan Rea (Kawasaki Racing Team) went from the eighth spot on the grid to third position in just a few turns, while Chaz Davies (Aruba.it Racing – Ducati) was fifth at the end of the first lap.
The Northern Irish Kawasaki rider was unstoppable and at the start of the second lap he moved up behind race leader, Marco Melandri. In the meantime, Davies moved into fourth.
The Ducati riding Italian tried to set the race pace, but Rea would not let him get away at the front, tailing him closely at just a two tenths gap.
During the third lap, the number 7 rider managed to get past the Spaniard on the satellite Ducati, thereby moving into third place and beginning to chase down the leading pair. In the fifth lap Rea overtook Melandri, making the Kawasaki rider the new race leader.
During the eighth lap, Race 1 winner Chaz Davies overtook his teammate, moving into place behind Rea.
Rea, Davies and Melandri made up a trio within a half a second of one another, with the other Kawasaki rider, Tom Sykes, having difficulty and stuck in sixth place.
During the eleventh lap, Davies made his decisive attack on Rea to take the race lead. In the meantime, Sykes managed to move into fourth place, but the gap that had accumulated behind the leading group was almost twelve seconds.
On the nineteenth lap the white flag with a red cross came out because a few drops of rain had begun to fall on the German track in sector 4.
This did not compromise Chaz Davies' race as he went on to finish first with an advantage of more than two seconds over the reigning World Champion and more than four seconds ahead of Marco Melandri, third under the chequered flag.

Opening up the events on Sunday was the FIM Supersport 300 World Championship which started at 11:30 AM local time. With an asphalt temperature of 35°C, almost all the riders opted for the medium compound solution on the rear. In pole position was Sheridan Morais on his team Kallio Racing Yamaha. The South African got off the line well and managed to hold onto the race lead ahead of Italian rider Federico Caricasulo (GRT Yamaha Official WorldSSP team) and Frenchman Jules Cluzel (CIA Landford Insurance Honda). During the seventh lap, Frenchman Lucas Mahias (GRT Yamaha Official WorldSSP team), who had started from the fifth spot on the grid, managed to overtake his compatriot to move into third position behind his teammate. However, on the ninth lap, the number 144 Yamaha rider went long on a corner and lost two positions to Cluzel and Sofuoglu.
With just a few laps to go, Cluzel lost his position to Turkish rider Kenan Sofuoglu (Kawasaki Puccetti Racing). During the eighteenth lap, the fate of the race was decided: Kenan Sofuoglu managed to get the better of Sheridan Morais to move into the lead, but in the meantime, Federico Caricasulo crashed out, taking with him his teammate Mahias who had been right behind him. Race Direction was forced to red-flag the event, deciding the end of the race and, in accordance with the regulations, the positions from the previous lap (the sixteenth) were validated. Sheridan Morais was declared race winner ahead of Kenan Sofuoglu and French Yamaha rider Lucas Mahiaswho, despite the crash, still managed to reach pit lane astride his bike, therefore earning third place, unlike an unlucky Federico Caricasulo. Thanks to this third place finish, Lucas Mahias is able to hold onto first place in the overall standings with 121 points, but Turkish rider Kenan Sofuoglu is now just one point behind and this situation promises a very thrilling Championship finale for all the fans.

The third race of the day was the FIM Supersport 300 World Championship. Winning the race was Alfonso Coppola (SK Racing) astride his Yamaha ahead of Spaniards Marc García (Halcourier Racing) and Mika Pérez (WILSport Racedays). Thanks to this third place finish, Pérez is now the new leader in the Rider Standings with a two-point advantage over Scott Deroue (MTM HS Kawasaki), three ahead of his compatriot García and four over today's winner, Alfonso Coppola.

Closing out the race weekend were the protagonists of the FIM Superstock1000 European Championship, dominated once again by the Ducati riders. Until the penultimate lap, it was Federico Sandi on his Berclaz Racing Team BMW S 1000 RR who dominated the race, but just a few turns from the end, the Italian rider went long on a corner, sliding back to fifth place. Exploiting on the mistake was the leader in the overall standings, Michael Ruben Rinaldi who rode his Aruba.it Racing - Junior Team Ducati Panigale R to his third win of the season, increasing his Championship lead. The Italian finished ahead of teammate Mike Jones and Roberto Tamburini (PATA Yamaha Official STK 1000 Team).

In Race 2 of WorldSBK, rider choices for the rear were unanimous, with all the riders opting for the W0051 SC1 development solution (option B) which had already been used by almost all the riders in Race 1.
On the front, there were not many changes with respect to Race 1. The V0952 SC1 development solution (option C) was still the most used and, compared to Race 1, popularity went up, with fifteen riders using it in Race 2. 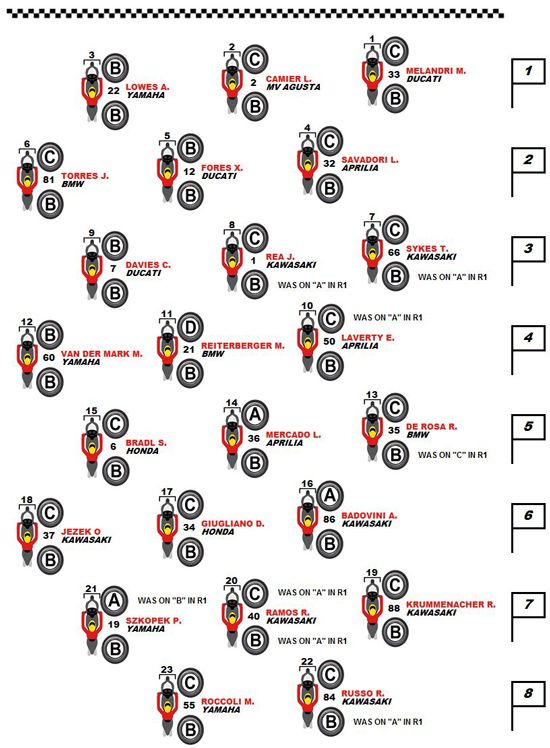 In the WorldSSP the most popular tyre on the rear was also the medium compound option, namely the V1201 SC1 development solution (option B) which was chosen by no less than twenty-nine of the thirty-two riders on the grid.
For the front, the riders just about split their preferences between the standard SC1 (option A) and the W0378 SC1 development solution (option B). • Number of solutions (dry, intermediate and wet) for the WorldSBK class: 6 front and 7 rear

• Number of tyres available for each WorldSBK rider: 77, including 39 front and 38 rear

• Number of solutions (dry, intermediate and wet) for the WorldSSP class: 6 front and 4 rear

Number of tyres available for each WorldSSP rider: 49, including 28 front and 21 rear