Checa’s brilliance shines on at Silverstone

World Championship leader Carlos Checa (Althea Racing Ducati) had a remarkable weekend in front of 64,000 fans at Silverstone, despite not expecting to be in full contention before arriving in the UK. In winning the first race Checa became the rider who gave Ducati 300 race wins in this championship, and added one to the total when he took his second win in a few hours. His race two victory was his tenth of the season. Checa is something of a century man, as he notched up 100 WSBK races in the second encounter and he was also the rider to give Honda its 100th win in WSBK, at Miller Motorsports Park in 2008. 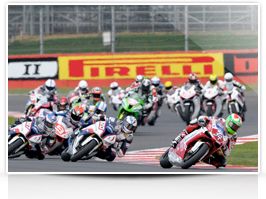 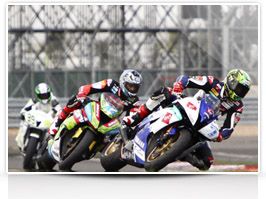 “Facing radically different conditions compared to Donington Park’s race in March just 100 km north, Pirelli was prepared for the Silverstone Circuit with over 4800 tyres to support 140 riders. For SBK, these options consisted of an SC1, SC2 and a development mid-soft front tyre, along with  an SC0 and intermediate rear. Superpole started off the weekend with BSB Championship rider and wildcard Hopkins (Suzuki) setting a new track record of 2'04.041 on Pirelli’s Diablo Superbike qualifying tyres. During R1 of SBK with a racing surface of 31°C, the mid-soft ‘B’ front and soft ‘B’ rear was the popular tyre choice, with Laverty on a slightly harder  SC1 rear tyre, Camier, Biaggi and Haslam on the  SC2 front, and Haga and Guintoli on the  SC1  front. Technical problems left both factory Aprilias out of podium contention, but race-winner Checa (Ducati) and the two Yamahas of Laverty and Melandri gave the fans a real race, rounded out by Hopkins (Suzuki) in the top 5. R2 of SBK saw a nearly identical result, with the factory Aprilias trailing the podium and Biaggi recording the Best Lap of 2’05.5. Supersport was equally productive, with development work on Diablo Supercorsa SC0’s progressing well, having seen Yamaha, Kawasaki and Honda finish on the podium and only a 2.5 second gap amongst them. Infront Motor Sport’s contract with Pirelli as Official Tyre Supplier has been renewed through the end of 2015, confirming Pirelli's 8 years of continued tyre development for faster, closer and more entertaining racing.” - Giorgio Barbier, Racing Director, Pirelli Moto 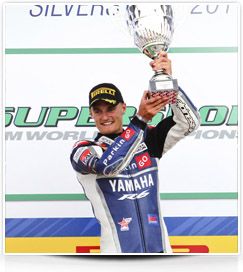 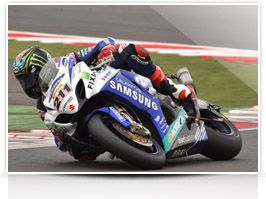 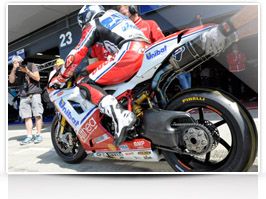 Carlos Checa: “I didn’t know it was my hundredth race, but it’s most important I’m not 100 years old! It was also Ducati’s 300th win, a fantastic weekend, and I will remember it for these many reasons. You never know, there are still many races to go and it’s easy to lose points but now we arrive at some tracks where I feel more comfortable. I expected to have more trouble at Silverstone but we worked, planned and adapted well to make a perfect result. For sure now we go on holiday quite relaxed!” 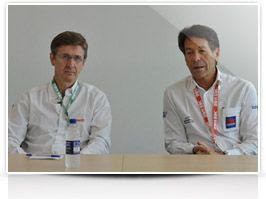 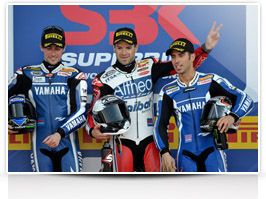 Eugene Laverty: “I’ve got to be happy with 40 points. It’s not a victory but two seconds are going to have to do. I was pushing for the win, in particular for my brother John who’s laid up in hospital. It was a better second race for me, after Carlos rode away in the first one. For race 2 I changed the rear tyre, there was an improvement but every time I closed in on Carlos he reacted. The Yamaha has been working well around here, last year it did the double and me and Marco are on the podium this time round.” Marco Melandri: “It’s been a good race, I changed the tyre for race 2 to get better grip on the left side, but the lap time at the beginning was faster so it was tricky for me to follow the leaders. After ten laps I started to get a better feeling with the bike and started to go faster than the guys in front of me. I caught Camier and Max was behind me but I really wanted this podium, a big thanks to all of my team.” Behind the riders in the front positions John Hopkins delivered on his Superpole status for much of raceday only fading towards the end of each contest, as a wildcard rider arrived with interest at this round. A brace of sixth places for Sylvain Guintoli put another privateer well in the mix, while local rider Haslam worked hard for his race finishes in the points. For the other main regulars, Michel Fabrizio (Suzuki Alstare) had a high of ninth in race two, and Joan Lascorz (Kawasaki Racing Team) was seventh in race one, having started 19th on the grid. Stand-in rider Alex Lowes (Castrol Honda) did not finish either race, Ayrton Badovini (BMW Motorrad Italia SBK Team) was tenth on each occasion and his team-mate James Toseland battled hard in each race to finish 12th and 13th. Another comeback rider, Troy Corser, was ninth in race one. 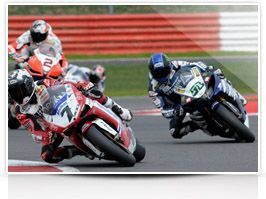 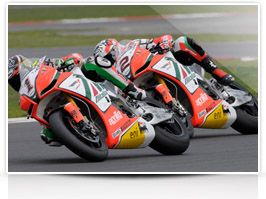 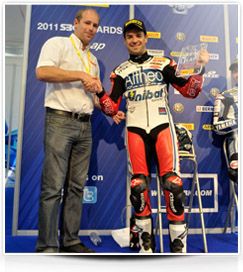 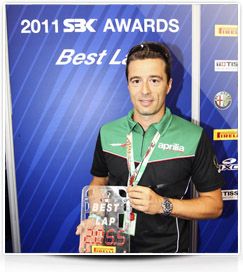