Citroens ready for round two of Pirelli-backed series 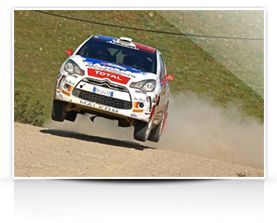 The Citroen Top Driver series – which rewards the winner with a fully-paid drive in the WRC2 championship next year – moves to Sardinia for round two of the championship this weekend, with all of the competitors running once more on Pirelli tyres for the Italian firm’s home event. The series is run with the same car for all competitors, the Citroen DS3 R3T, and the same Pirelli tyres – meaning that driving talent above all shines through. For many years, one-make championships such as this one have identified world champions of the future and they are at the very heart of Pirelli’s philosophy, with the Italian firm supporting a number of one-make rally championships in Italy, and also supplying GP3 and GP2 in circuit racing – which can eventually lead young drivers all the way to Formula One. In order to give all these hungry young drivers the best chance to shine, they need the best and strongest possible equipment. For Sardinia, the Citroen drivers will use Pirelli Scorpion K2 tyres, in 195/70-15 size. This is the hardest compound in the K range; capable of dealing with temperatures that are expected to be in excess of 30 degrees centigrade and stages that are often more than 25 kilometres long, with a hard and aggressive base. As an alternative to the K2, Pirelli’s Scorpion K4 tyres will also be available to the crews in size 195/70-15. In the extremely unlikely event of rain, the drivers can rely on Pirelli’s K6 tyres. This makes Sardinia one of the hardest rallies for tyres in the whole championship, but Pirelli can rely on technology developed for the World Rally Championship when it was sole supplier between 2008 and 2010, resulting in a puncture rate of less than 0.02% throughout the whole three seasons. Since the opening round in Portugal, the Citroen Top Driver’s popularity has soared with the series now boasting 10 crews and four teams competing for championship honours. The leaderboard is currently dominated by Frenchmen with Bryan Bouffier leading second-placed Sebastien Chardonnet but other drivers such as Alastair Fisher and Keith Cronin will prove a formidable match in Sardinia. Pirelli’s product manager, Terenzio Testoni, commented: “It’s fantastic that we have such a healthy field of drivers in the Citroen Top Driver series on its debut year. We have a wealth of talent with 10 crews contesting Sardinia including triple British Rally Champion Keith Cronin and former Rallye Monte Carlo winner, Bryan Bouffier. All of the teams did a sterling job in Portugal and there is no clear indication of who will finish on the podium this time round. However, the stages in Sardinia are renowned for being rough underfoot so the crews will have to look after the cars and the tyres in order to finish with a strong result. On behalf of Pirelli, I would like to wish all 10 competitors the best of luck this weekend.” Rally Italia Sardegna gets underway today [Thursday 20 June] with the pre-event shakedown. The crews will then take part in a media training session before heading for Sassari for the ceremonial start, which is due to commence at 0700hrs. For more information about Pirelli please contact Anthony Peacock on +44 (0)7765 896 930 or anthony@mediaticaworld.com

Citroens ready for round two of Pirelli-backed series
Newsroom