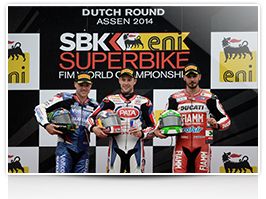 Thanks in part to increasingly high performance of Pirelli tyres, Loris Baz takes Superpole, improving on Tom Sykes' from last year by 7 tenths of a second. The round which just came to an end at the Assen circuit was strongly impacted by unpredictable weather which had a dry Superbike Race 1 and Supersport race, whereas Race 2 and the Superstock 600 and Superstock 1000 were wet races. This weekend nearly all the solutions Pirelli provided for the riders were put to use, including the wet tyres. For Superbike the weekend started off with Saturday's Superpole where, thanks in part to the progress made with the new Pirelli DIABLO™ Superbike tyres, Loris Baz lapped at 1'34.357 to take pole position with a time 7 tenths of a second better than the one Tom Sykes put on the boards last year when he took pole position with a time of 1'35.043. On Sunday Race 1 was held in the dry and won by Frenchman Sylvain Guintoli (Aprilia Racing Team) with Englishmen Tom Sykes (Kawasaki Racing Team) and Jonathan Rea (Pata Honda World Superbike Team) crossing the line behind him. Loris Baz (Kawasaki Racing Team), after taking pole position on Saturday, was unable to do better than fourth place in the race. As was the case at Aragón, in the dry basically all the riders on the first three rows opted for the new S1699 development solution on the front and for the tyre which was custom made specifically and solely for the Superbike riders. Race 2, after being reduced to 15 laps due to the impending rain during the sighting lap, was held in a heavy downpour for only 3 laps before being called due to the driving rain. About an hour later the race was reduced to 10 laps for the third and final start. All the riders used the grooved DIABLO™ Rain wet tyre for the first time this year, a tyre in 100% silica that maximises the safety feeling on the front, providing wet grip in extreme situations of maximum leaning, violent braking and initial acceleration. The first rider under the chequered flag was Jonathan Rea (Pata Honda World Superbike Team), followed by Alex Lowes (Voltcom Crescent Suzuki) and Italian Davide Giugliano (Ducati Superbike Team). The FIM World Supersport Championship had a dry race with local hero Michael Vd Mark (Pata Honda World Supersport) proving himself and winning the race on grooved DIABLO™ Supercorsa standard SC1 tyres as well as putting in the fast lap and breaking the track record. Florian Marino (Kawasaki Intermoto Ponyexpres) crossed the line behind him to become the new leader in the overall standings, followed by Jules Cluzel (MV Agusta RC-Yakhnich Motorsport). 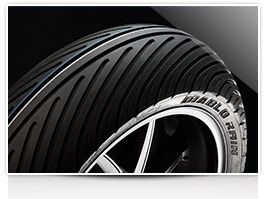 In Superstock 1000 the race was shortened to 10 laps due to the rain with Kevin Valk (MTM Racing Team) winning on his Kawasaki ZX-10R, second place for Ondrej Jezek (Barni Racing Team) and the bottom step of the podium for Matthieu Lussiana (Team Garnier by Aspi). It was a rainy race on Saturday for the Superstock 600 FIM European Championship riders with a forced tyre choice of DIABLO™ Rains for everyone. First across the finish line after 13 laps and starting from the tenth spot on the grid was Finn Niki Tuuli astride his Yamaha YZF R6 for the Kallio Racing team, now also leading the overall Championship standings. Finishing behind him were Italian Kevin Manfredi (Agro-on wil Racedays) who also took the fast lap at 1’59.22 and Wayne Tessels (Waynes Racing Team)who had to settle for the last step of the podium in his home race. Comment from Giorgio Barbier, Pirelli Moto Racing Director: “This was a demanding weekend for everyone because of the weather which made race management more than a bit complicated. In any case, we are quite satisfied with our work because the unpredictable weather gave us the opportunity to see basically the full complement of tyres we brought to Assen in action, including the wet tyres. The time set by Loris Baz to win Superpole on Saturday is quite interesting - confirmation that the constant development of our tyres year after year can lead to some significant results. My compliments obviously to Sylvain Guintoli for his win in Race 1 and Jonathan Rea who once again has proven his skill in the wet. Kervin Bos also did a great job as wild card finishing in 11th place in Race 2. Our goal here was to obtain confirmation on the quality of the solutions we introduced at Aragón. The weather didn't help us in this respect but in any case we were able to gather some encouraging information from Race 1 and the Supersport race. Now all that's left is to hope for better weather during the next round at Imola, but in the meantime we are enjoying the third consecutive Bol d'Or win today with the Kawasaki SRC team”. The Pirelli solutions chosen by the riders: At Assen, partly due to the unpredictable weather, all the solutions Pirelli brought for this round saw action. Nevertheless in Race 1 of Superbike on the front most of the riders in both Superbike and EVO opted (for the second round in a row) for the SC1 development solution (S1699), considered more precise and better performing than the standard SC1. For the rear the Superbike riders almost all chose the SC1 development solution (S1185) which was already quite popular during the Spanish round and the EVO riders provided excellent confirmation of the tyre dedicated exclusively to this class, the SC0 development R1120, with the remainder of the riders casting a split vote between the standard SC0 and SC1. In Race 2 all the riders chose DIABLO™ Rain wet tyres for both the front and rear due to the driving rain. In Supersport the riders confirmed their preference for the SC1 standard, as they had already done at Aragón, making it the unanimous race choice. On the rear the SC1 development solution (S624) was also confirmed, chosen by about 80% of the riders on the grid as it had been in the Spanish round as well. These are quite significant indications for Pirelli because they show how the two solutions adapt quite well to very different temperatures and tracks. 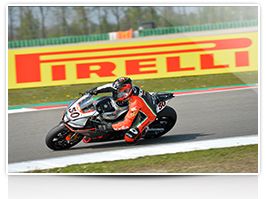