The English rider for the Akashi-based manufacturer is back on the top step of the podium after the double win at Donington Park, but it was the two Ducati riders who stole the show, battling one another and keeping the pressure on Sykes down to the last corners 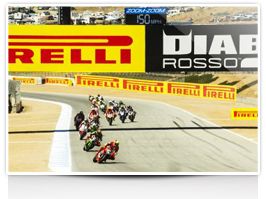 After their one-two finish in the MOTUL FIM World Superbike Championship Race 1 yesterday, Kawasaki managed to place one of their riders on the top step of the podium in Race 2 as well. In this case, bringing home the victory was Tom Sykes (Kawasaki Racing Team) since his teammate Jonathan Rea, the Race 1 winner yesterday, was forced to retire today following a mistake in the first half of the race. But the stars of the show this Sunday were also definitely the Aruba.it Racing – Ducati riders, Davide Giugliano and Chaz Davies, who finished respectively on the second and third step of the podium, but who gave the Laguna Seca Mazda Raceway Track public an exciting show with a spectacular battle of the Ducatis for second place, as well as their constant attacks on the English rider from the Akashi-based manufacturer. From Race 2 came nothing but confirmation for Pirelli since the riders chose to use mainly the same solutions they had used in Race 1 on Saturday, in other words, the standard SC0 on the rear and the S1699 development tyre on the front. Race 2 began well for Davide Giugliano who, during the third lap, overtook Tom Sykes to move into the lead. Giugliano managed to pull away, leaving the group of Sykes, Rea and Davies a half second behind him. Unfortunately, the Italian's attempt to run away with the race on his Ducati was thwarted by a red flag during the sixth lap due to Pawel Szkopek's crash. The race was suspended with twenty-one laps left to race at the restart. At the second start, Tom Sykes got off the line well, but shortly thereafter, Davide Giugliano overtook him for the lead. Behind them were Nicky Hayden astride his Honda and Jonathan Rea on his Kawasaki who soon moved into third place after overtaking the “Kentucky Kid”. Giugliano tried to pull the pin but Sykes was having none of it. In the third lap after the restart there was a crash, fortunately without consequences, for Lorenzo Savadori who was forced to retire. In the fourth lap, both the Kawasaki riders made a spectacular move on the Corkscrew to overtake Giugliano. Sykes was the new race leader, but Rea was extremely close and in the fifth lap he made his move for the lead. 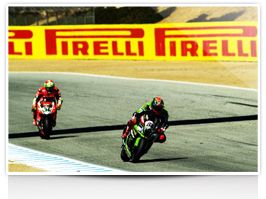 Shortly thereafter, however, the Irishman made a mistake and ended up in the sand. He managed to get back on the track in tenth place, but then he stopped and decided to retire. In the second half of the race, Nicky Hayden was overtaken first by Chaz Davies and then by Xavi Forés. In the final laps, Davide Giugliano began to hunt down Sykes in earnest, with Davies right on his heels. The three were within a gap of seven tenths. At the start of the eighteenth lap, Chaz Davies decided he was not going to settle for the inconvenient third place and he began to wage a battle with his teammate for second. Davies managed to overtake the Italian temporarily, but at the Corkscrew the latter took it back. In the nineteenth lap, the three riders were within a gap of four tenths and it was a heart-stopping finale with the Ducatis battling it out down to the last corner and Giugliano keeping Sykes in his sights right down to the end. Race 2 standings: 1) Tom Sykes (Kawasaki Racing Team) 2) Davide Giugliano (Aruba.it Racing – Ducati) 3) Chaz Davies (Aruba.it Racing – Ducati) 4) Xavi Forés (Barni Racing Team) 5) Nicky Hayden (Honda World Superbike Team) 6) Jordi Torres (Althea BMW Racing Team) 7) Michael van der Mark (Honda World Superbike Team) 8 ) Niccolò Canepa (Pata Yamaha Official WorldSBK Team) 9) Anthony West (Pedercini Racing) 10) Román Ramos (Team GoEleven) … The Pirelli solutions chosen by the riders for Race 2: Like Saturday, Sunday was also very hot with asphalt temperatures approaching 50°C. Therefore, in Race 2 the riders substantially confirmed their preferences from Race 1. Especially on the rear, the SC0, standard soft solution, remained the most popular solution, chosen by 20 of the 23 riders on the grid. Only Ducati rider Davide Giugliano and the Kawasakis ridden by Dominic Schmitter and Gianluca Vizziello opted for the T1257 SC0 development tyre. On the front, the S1699 SC1 development solution was once again the most popular although, compared with Race 1, it lost a few riders who preferred the standard SC2. Besides Tom Sykes and Jonathan Rea, these also included Nicky Hayden, Lorenzo Savadori, Alex Lowes, Leon Camier, Alex De Angelis, Joshua Brookes, Saeed Al Sulaiti and Gianluca Vizziello. The only rider to choose the hard SC3 solution on the front was Karel Abraham. 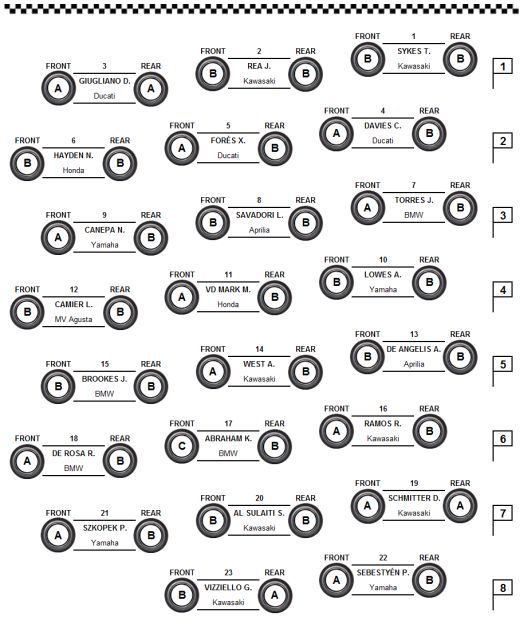