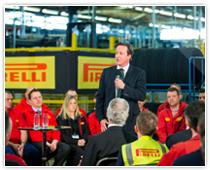 In April, British Prime Minister David Cameron made an official visit to the Pirelli manufacturing facility in Carlisle, Cumbria where he met with workers. Pirelli Chairman, Marco Tronchetti Provera, the Italian ambassador in London, Pasquale Terraciano, and local management were there to welcome Cameron and keep him updated about the factory’s current projects. Funding received by Pirelli from the Department for Business Innovation and Skills as part of the Regional Growth Fund, currently 440 thousand pounds, has been put towards the development of an innovative range of carbon-cutting Ultra High Performance tyres whose production fits in perfectly to Pirelli’s Premium strategy. 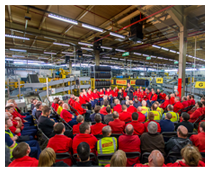 Opened in 1968, the Carlisle factory employs 756 staff and, along with Burton-on-Trent, is one of Pirelli’s two sites in the United Kingdom with an overall output of around 3 million High Performance tyres per annum. Since 2000, Pirelli has invested in the region of 70 million pounds (around 82 million euro) in Carlisle and a total of 144 million pounds (almost 170 million euro) in Great Britain as a whole.