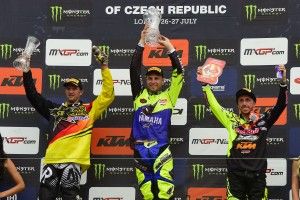 The ‘old school’ and special Czech circuit of Loket produced some different results for the fourteenth round of seventeen in the FIM Motocross World Championship. Celebrating his first victory in the premier MXGP class was Belgium’s Jeremy Van Horebeek. The factory Yamaha rider steered his YZ450FM with SCORPIONTM MX MidSoft 32F front and MidSoft 32 rear with dimensions of 120/90-19; as selected by other Pirelli racers. He took a comfortable runner-up position in the first moto and then pressurised leader Antonio Cairoli in the second until the champion made a mistake and ‘JVH’ was able to win and grab his maiden MXGP success. The championship leader was the only Pirelli representative to consider the SCORPIONTM PRO for the front of his 350SX-F to cope with the strange and slick Czech hard-pack but he eventually had to accept third place at a track he dislikes. Suzuki factory rider Kevin Strijbos sealed second overall after winning the opening moto and obtaining his first chequered flag of the season. MXGP produced a full Pirelli podium and the final results mean that Cairoli holds a 57 margin over Van Horebeek in the championship standings with just 150 left to bag. MX2 World Champion and clear series leader Jeffrey Herlings was absent due to a broken femur and so the class belonged to KTM team-mate Jordi Tixier on this occasion (and for the first time in the Frenchman’s career). Tixier raced with SCORPIONTM MX MidSoft 32F front MidSoft 32 rear as did the other 250cc Pirelli stars and ‘911’ owned the first moto and followed up with a fourth in the second race to confirm his triumph. Third place overall was another Pirelli athlete, Christophe Charlier, while other protagonists like Tim Gajser and Dylan Ferrandis classified sixth and tenth; the latter had his GP ruined by a collision at the beginning of the first moto that saw the Frenchman needed to pit and repair a broken exhaust. A Pirelli clean sweep was enjoyed in the European EMX125 Championship that was won by German Brian Hsu. Thanks to his third victory in a row and moto ‘double’ Hsu has overtaken another Pirelli star, Davy Pootjes, in the championship chase with just one event remaining. Second in the Czech Republic was Sweden’s Alvin Ostlund while third was New Zealand rookie Josiah Natzke. The last round of the FIM Motocross World Championship to occur on European soil before the calendar moves into a South American stint for the final two fixtures will take place on August 2nd-3rd in the sand of Lommel in Belgium. 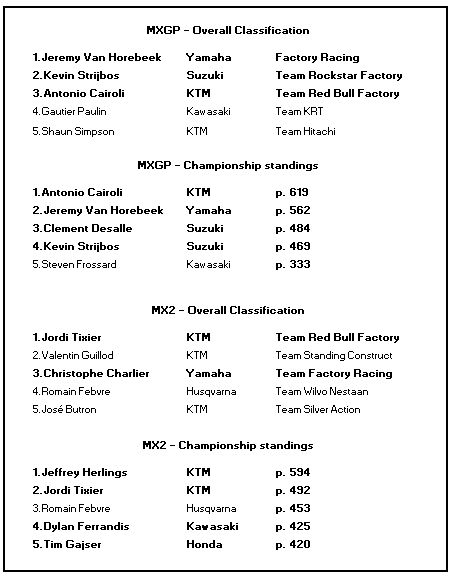