Double for Checa but championship fight tightens up 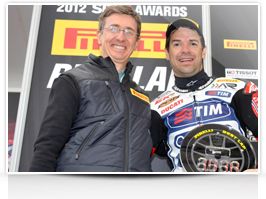 Carlos Checa (Althea Racing Ducati) was a force to be reckoned with once more at Ducati’s home circuit, and he duly posted his desired double in the FIM Superbike World Championship races in front of 81,000 fans at Imola. The final result of his winning labours is that he is now leading the championship, but only just, from Max Biaggi (Aprilia Racing) and double second place finisher Tom Sykes (Kawasaki Racing Team) with the English rider having his best results since his win in Germany last year. “In this first European race here at the Imola track we introduced the new Diablo Supercorsa SC tyre for the Superstock 1000 FIM Cup riders which will be used this year only by the STK 1000 riders. Then, starting from next year, it will also be used by the 600 class and Supersport riders, as well as in the various national  and open tyre championships in which Pirelli participates. For the Superbike class we brought a new SC1 compound for the rear, developed specifically for medium-low temperatures, which was quite popular with the riders in both race 1 and race 2 as opposed to the standard SC1 tyre. This leads us to believe that we have done a good job developing this tyre. The other riders, also in light of the slightly cooler temperatures compared to the last few days, opted for the SC2 solution which is particularly suited for these situations where the asphalt temperature shifted from 11° in race 1 to 18° in race 2. Carlos Checa once again showed that he is very strong on his Ducati and that he is definitely a contender for the title again this year, but Tom Sykes on his Kawasaki and Leon Haslam on his BMW have also grown a lot and will certainly be chasing the defending World Champion. And we can’t forget Max Biaggi, who will be giving it his all right down to the end together with these three riders during the season. Having three different motorcycle manufacturers on the podium in both races and even five different manufacturers in the first five places for race 2 is very important for us because it means that we are working in the right direction to level the playing field for all the riders and manufacturers so that they can all aim for the title, making this a very heated Championship.  Last, but not least, I would say that the crowds and the media here at Imola demonstrate how the Superbike Championship has grown significantly and we are certainly pleased by this as the sole supplier for the Championship through 2015." Giorgio Barbier, Racing Director, Pirelli Motorcycle Pirelli BEST LAP Awards: SBK Race 1 – Carlos Checa (Althea Racing), 1'47.877 (Lap 13) SBK Race 2 –  Tom Sykes ( Kawasaki Racing Team), 1' 47.552 (Lap 7) Total BEST LAP (SBK): Checa C. (Althea Racing): 2, Biaggi M. (Aprilia Racing Team): 1, Tom Sykes (Kawasaki Racing Team), 1 WSS –  Parkes B. (Ten Kate Racing Products),  1'51.952  (Lap 9) Total BEST LAP (WSS): Foret F. (Kawasaki Intermoto Step): 1, Parkes B. (Ten Kate Racing Products), 1 Stk1000 –  Sylvain Barrier (BMW Motorrad Italia Goldbet ), 1’51.551 (Lap  2) Stk600 –   Nacho Calero Perez (Team Trasimeno), 1' 54.481 (Lap 7) Carlos Checa: “It’s a big family here for me and I feel like I’m at home, sharing these emotions with all the people! Five times winning here is also very special. We worked very well this weekend, and it helps us to go ahead in the championship. Of course after two wins, my position is getting better, but anyway I just want to think about today and the fantastic moment and the job we did. Thanks to the team, Ducati and all the fans!” Tom Sykes: “I think it was a very good weekend for myself and Kawasaki. The ZX-10R has been great, we had pole position and two seconds in the races so I don’t think we could have asked for much more. Carlos has done a great job today, we had no answer, he was able to preserve the tyre that bit better than us. That’s something we need to work on but the big picture is that we’ve got a hatful of points again. If we continue like this I’ll be very happy.” Leon Haslam: “It was a tough race, the top 3 got away again and I had to pull them back. I got comfortable behind Tom, thought I could have a go at him towards the end. Every time I pushed I got a little bit of chatter and kept losing my line, and had a few big moments on the last few laps, but he rode real good, and Checa rode a fantastic race once again. It was the first-ever double podium for BMW so I’m happy about that and we’ll take what we’ve learnt here to Assen. The ankle is a bit sore and I hit a couple of kerbs but  for Assen I’ll be 100%.” Biaggi missed the podium twice today, by narrow margins on each occasion. In each 21-lap race he had to give best to the impressive Leon Haslam (BMW Motorrad Motorsport) who is still riding with screws in his foot after his big crash in Australia in late February. This was Haslam’s personal best weekend for BMW as well, on a day of significant happenings for riders, teams and manufacturers. 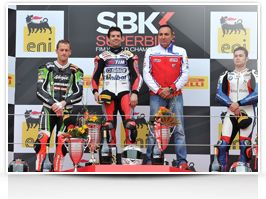 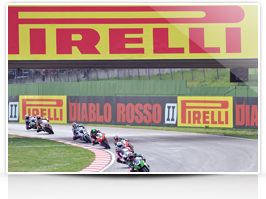 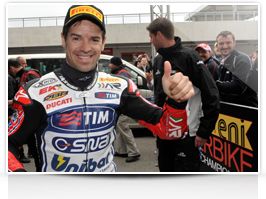 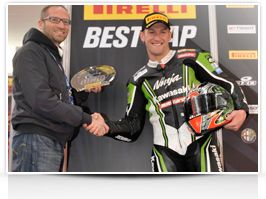 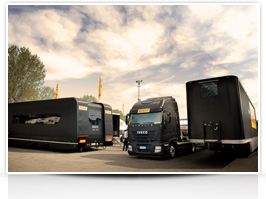 Double for Checa but championship fight tightens up
Newsroom