Following their successful use at the Nürburgring in Germany last weekend, Pirelli’s soft compound tyres formed a highlight of the action at the twisty and bumpy Hungaroring. Although the weekend started with warm conditions, Pirelli’s rain tyres were also seen on track at Budapest, equipping the GP2 and GP3 drivers during Sunday’s races. 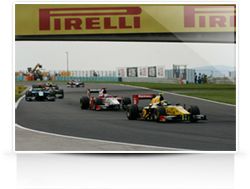 Pirelli’s P Zero GP2 and GP3 soft compound tyres were the perfect choice for Budapest’s slow, tight and twisty circuit where good grip is vital. With heavy braking required and high traction needed for the low speed corners, the GP2 and GP3 drivers faced quite a challenge to maximise the use of their tyres, especially after some rain hit the track on Sunday morning. The GP3 drivers completed their race two on Pirelli’s wet tyres while both the P Zero rain and dry weather tyres equipped an incredibly closely-fought GP2 sprint race. Pirelli’s Racing Manager Mario Isola explained: “Our P Zero soft compound tyres enjoyed a consistent performance over the weekend, providing good grip and significantly contributing to the action on a dry track, creating some interesting overtaking opportunities. Tyre management was a key factor, rewarding those drivers who understood the behaviour of the soft compound rubber in dry and warm track conditions. On Friday we saw one of the most outstanding GP2 qualifying sessions held so far and a number of wheel to wheel battles during Saturday’s feature race, with the teams putting in place a number of different strategies and some drivers pitting very early. Those who waited to change tyres had the right strategy maximising the use of both sets. Our P Zero wets took centre stage on Sunday morning, together with our GP2 slicks, which were used in tricky damp conditions. The GP2 drivers pulled off some aggressive manoeuvres and used a number of interesting strategies during the sprint race. Also, the GP3 drivers did a great job running on wet tyres in tricky track conditions. They struggled a bit with grip but were comfortable enough to try some great moves, like Rio Haryanto who made up eight positions and took a podium on a track where it is notoriously difficult to overtake.” GP2 Sprint Race winner Stefano Coletti (Trident Racing) commented: “I was one of the few drivers who started the sprint race on slick tyres in wet conditions and kept them on until the chequered flag was out.  Almost everybody else started on wets and then switched to slicks after 10 laps when the track was drying up. This gave me a great advantage over the rest on the field. With 10 minutes left to go it started raining again and I had to go into the pits to put on wet tyres. It was amazing to jump from P21 to the front row and win such a difficult race. Thanks to Pirelli’s tyres, the races are really challenging for the drivers but they are certainly much more interesting to watch this year.” Local GP3 driver Tamas Pal Kiss (Tech 1 Racing) commented: “I like Pirelli’s soft compound tyres because they suit best my driving style. I had a good pace running on slicks during race one and over the last laps I was even third quickest. In a way, I was hoping to keep them on for race two as well, like the GP2 drivers did. I would have enjoyed running on slicks on a wet track, just as was the case at the Nürburgring where I did pretty well. In the end, it was really good to race on home ground in Hungary.” Romain Grosjean (DAMS) has extended his lead in the GP2 drivers’ standings to 74 points from Giedo Van der Garde (Barwa Addax Team) on 49, with his teammate Charles Pic on 42 points. Valtteri Bottas (Lotus ART) now leads the GP3 standings by seven points ahead of Alexander Sims (Status Grand Prix). Pirelli’s P Zero GP2 and GP3 tyres will be seen next at the Spa-Francorchamps track in Belgium where they will equip Formula One’s feeder series from 26 to 28 August in weather conditions that are likely to be changeable. *** For further information please contact Laura Bartoli on +44 7500 877 304 or laura@mediatica.co.uk