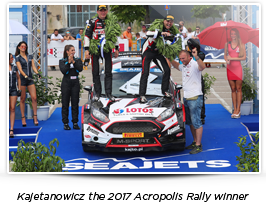 August marks a crucial month for the European Rally Championship, which resumes this weekend on the all-asphalt Rally Rzeszow in Poland, with Pirelli drivers at the forefront.
A new chapter also opens in Pirelli’s well-known policy of supporting young drivers. A fresh Pirelli-backed programme is being launched by ACI Team Italia, with 20-year-old Italian Luca Bottarelli taking the start in a Toyota GT86 CS-R3 from Toyota Motorsport Gmbh. This in another important initiative within a championship that already benefits from two schemes to promote young drivers this year. The first is the ERC Junior Under 27 series, which uses front-wheel drive R2 cars with Pirelli as exclusive tyre supplier. The second is the ERC Junior Under 28 competition, using more powerful four-wheel drive R5 cars, which is currently led by Pirelli driver Marijan Griebel from Germany, who won the ERC Junior championship last year.. The fight for victory and the overall title. Kajetan Kajetanowicz (Ford Fiesta R5) will be aiming to repeat the success he enjoyed last year on his home event, to make up the 14-point deficit that currently separates him from the championship lead. The Pirelli-equipped 2015 and 2016 European Rally Champion will face plenty of rivals, with 23 R5 cars taking the start. Among them is the surprise return of Russia’s Alexey Lukyanuk, runner-up in the European Championship with Pirelli last year, who fell victim to a serious accident at home three months ago that interrupted his campaign following a triumphant win in the Canary Islands. 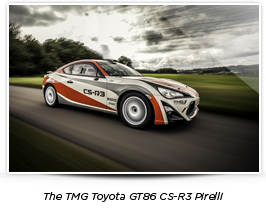 The ERC Junior championships return, with a race for the U27 and U28 titles. Following a two-rally break, the Junior categories return to action. Marijan Griebel and Nikolay Gryazin, currently first and third in the Under 28 R5 classification, will lead a healthy contingent of Pirelli drivers. In the Under 27 category, which is exclusively supplied by Pirelli, Chris Ingram (Opel Adam) is the overall leader after winning the opening two rounds, while Tamara Molinaro (Opel Adam) heads up the ladies’ classification. Luca Bottarelli makes his debut with Luca Rossetti as his mentor. Thanks to Pirelli, Luca Bottarelli can rely on a famous team mate – Luca Rossetti – as he makes his debut in the Toyota GT86 CS-R3 run by Motorsport Italia. The three-time European champion tested together with Bottarelli – nominated by ACI Team Italia this weekend – and passed on some useful advice on the car and its Pirelli tyres. The Italian federation-backed programme will also take in Barum Czech Rally Zlin (with Riccardo Canzian driving) and Rally Roma Capitale (with Gianandrea Pisani at the wheel). The route and the Pirelli tyres. Rally Rzeszow is the fifth of eight rounds of the European Rally Championship this year, run on asphalt roads that are not particularly abrasive. Last year, Kajetanowicz used medium compound P Zero RK7 tyres almost exclusively to win, but hotter temperatures are expected this year. The Pirelli drivers will have P Zero RK tyres in medium RK7 compound and hard RK5 compound, as well as the Cinturato RW in case of rain. The rally gets underway on August 3 from Rzeszow’s Millennium Hall, while the finish is at 17:30 on Saturday 5 August. Quotes Luca Bottarelli, ACI Team Italia driver: “This is a great chance for me to get some experience on the European Rally Championship in a factory car, so thanks to ACI Team Italia, Pirelli and Toyota for this amazing opportunity. It’s the first time that I’ve driven a rear-wheel drive car. I find it fun but hard work, so it was great to benefit from Luca Rossetti’s advice as well as the reassurance of the P Zero tyres that I use at home on the Italian championship too. My priority in Poland is just to get to the finish, hopefully with a good result.”