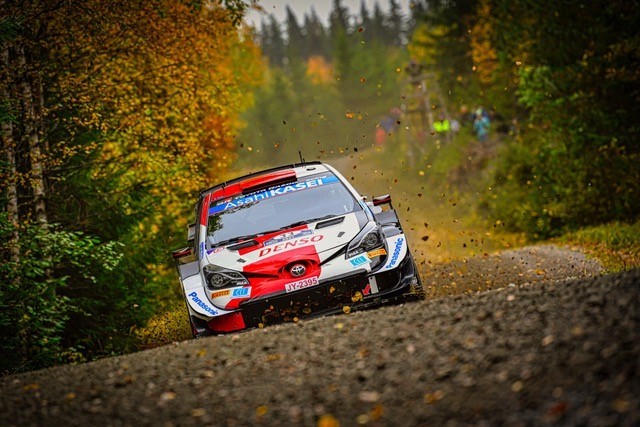 This year’s 70th anniversary Rally Finland was run in different conditions compared to its normal summer date, with the performance of Pirelli Scorpion KX tyres a key element to finding grip on the damp stages while also demonstrating strength and reliability over the famous jumps. With low wear, tyre strategy wasn’t a part of the equation this time, but Finland still underlined its reputation as being one of the fastest rallies of them all: Evan’s winning average speed was 125.5kph, and he also clocked the fastest average speed on a single stage – 133kph on SS18 (Laukaa).

The only tyre used from start to finish in the headlining WRC1 class was the soft compound Scorpion KX, while the WRC2 runners made use of the equivalent Scorpion K6A. The hard compound KX was only seen once throughout the 19 stages: used as a spare tyre by Evans for the last four stages. Instead, the damp surfaces and low temperatures (which didn’t exceed 11 degrees, dipping as low as five degrees on Sunday morning) constantly favoured the soft tyre, which demonstrated good grip and high resistance to the extreme forces of Rally Finland. This was also demonstrated by the big jumps on the Power Stage, Ruuhimaki, where M-Sport’s Adrien Fourmaux took the longest jump at 68 metres.

The Pirelli Scorpion KX soft was nominated as the main choice for Rally Estonia back in July as well, which ran in very different dry conditions, with temperatures of up to 35 degrees.

“The Scorpion KX Soft has proved to be a versatile tyre with a wide working range, reliable in both hot and cold conditions, as well as in fast and slow conditions, and on abrasive surfaces together with smoother roads. On top of that, the construction was strong enough to cope with all the jumps that are a hallmark of Rally Finland. This tyre was developed for possible use in Great Britain as well, which is likely to showcase cool conditions not dissimilar to those seen in Finland this weekend. Congratulations to Elfyn Evans, who was fast from start to finish and quickly worked out how to get the best possible grip from his tyres. For the next rally in Spain, the new P Zero RA HA will make its debut: our new hard compound for asphalt, which is even stronger than its predecessor.”

The absence of tyre strategy put the accent firmly on the skills of the drivers and teams, which meant that staying on top of the close competition and extracting every possible advantage was the biggest challenge. Up to halfway through the rally, less than four minutes separated the first from the last driver in the provisional classification. The battle for the lead was particularly tight even after Evans finally managed to get in front of Breen and Tanak: both of whom pushed him hard all the way to the finish.

Evans took the lead on this stage, setting an average speed of 129.4kph. He beat Tanak by 4.2 seconds and Breen by 6.8 seconds. The shortest stage of the rally, Harju at 2.31 kilometres, was a tight and twisty superspeical: signifcantly lowering the overall speed of the event.

Finnish drivers dominated the classes on their home event: former M-Sport factory driver won WRC2 on his debut with a Volkswagen Polo GTI R5 in eighth overall, ahead of Sweden’s Mads Ostberg in a Citroen C3 Rally 2 and Finland’s Jari Huttunen in a Hyundai i20 Rally 2. Emil Lindholm won WRC3 in a Skoda Fabia Rally 2, while Finnish championship runner-up Mikko Heikkila put in a strong performance to finish second in class with a similar car.