Excellent début in the MOTUL FIM World Superbike Championship for the new rear provided by Pirelli; pole position for Kawasaki with Tom Sykes and victory in Race 1 with Jonathan Rea 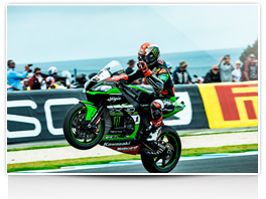 The reigning World Champion began the new MOTUL FIM World Superbike Championship with a win: in fact, Kawasaki Racing Team standard bearer, Jonathan Rea, won Race 1 in Superbike after starting just behind team mate Tom Sykes, in pole position, and Ducati rider Davide Giugliano (Aruba.it Racing – Ducati). Pirelli provided the riders with two front and three rear solution options, but the undisputed protagonist of the day was definitely the new U0794 rear development solution in medium compound that allowed an improvement in race time of half a second per lap with respect to the best race time last year, an important result that demonstrates the big steps forward Pirelli has taken in creating increasingly more effective development solutions on this track. 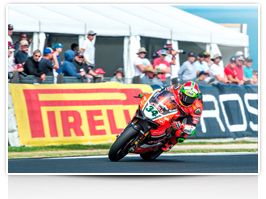 As proof of the consistent performance guaranteed by the new rear solution, many of the riders put in their fastest laps in the race finale, including Davide Giugliano who took the Best Lap in 1’31.445 in the last lap. On the demanding Australian Phillip Island track the first race day came to an end, as scheduled on the 2016 calendar, both for the Superbike and the Supersport riders. There was a 15-minute free practice session in the morning, followed by the two Superpole sessions for both categories and then, at 3 o'clock pm local time, Race 1 for Superbike was held. Tomorrow the morning warm-up sessions will be held, followed by the Supersport race at 1:30 pm local time and Superbike Race 2 at 3:00 pm. Race 1 standings: 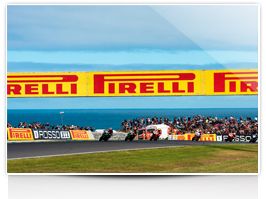 1) Jonathan Rea (Kawasaki Racing Team) 2) Chaz Davies (Aruba.it Racing – Ducati) 3) Michael VD Mark (Honda World Superbike Team) 4) Davide Giugliano (Aruba.it Racing – Ducati) 5) Tom Sykes (Kawasaki Racing Team) 6) Sylvain Guintoli (Pata Yamaha Official WSBK Team) 7) Leon Camier (MV Agusta Reparto Corse) 8 ) Jordi Torres (Althea BMW Racing Team) 9) Nicky Hayden (Honda World Superbike Team) 10) Joshua Brookes (Milwaukee BMW) The Pirelli solutions chosen by the riders for Race 1: Race 1 marked the excellent début of the new U0794 rear development solution which, not having been available during the test on Monday and Tuesday, the riders were able to try out for the first time ever only during the two timed free practice sessions that were held on Friday. Despite the limited practice time, most of the riders immediately expressed their appreciation for this solution, so much that in Race 1 an impressive 18 out of the 23 riders on the grid chose to use it. The most popular characteristic was definitely the consistent performance this new tyre guarantees that allowed Ducati rider Davide Giugliano to put in the fastest lap of the race at the very end. The rest of the riders opted for the race solution used in 2015, the T1105. On the front the most popular race solution was the S1699 SC1 development tyre, chosen by 16 riders. Jonathan Rea, teammate Tom Sykes, and Sylvain Guintoli were among those riders who chose the standard SC2 solution. 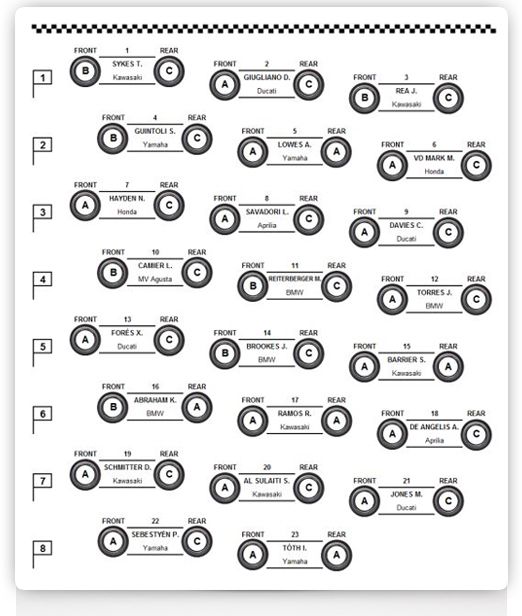 Excellent début in the MOTUL FIM World Superbike Championship for the new rear provided by Pirelli; pole position for Kawasaki with Tom Sykes and victory in Race 1 with Jonathan Rea
Newsroom