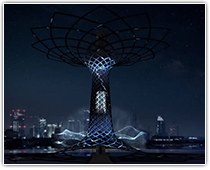 The theme of the Expo edition in Milan a century ago was “Science, the City and Life”, while today it is “Feeding the planet. Energy for Life". Pirelli is present today as it was back then, bringing its innovation skills to the Universal Exposition. At the world fair held in Milan in 1906, Pirelli set up its stands in the Automotive and Aeronautical pavilions, with aerostatic flight shows and airships flying through the sky over the city.  109 years later, on May 1st 2015, Milan reopened the gates to the Universal Exposition and Pirelli decided to support several related initiatives, including the “Life Tree”. “An important example of contemporary art which will become an icon of Milan’s creativity and industrial quality, a powerful symbol of the Expo worldwide” stated Marco Tronchetti Provera, Pirelli's president and CEO. The “Life Tree”, designed by Marco Balich, is the symbol chosen for the Italian Pavilion and it aims at underlining the creativity and industrial quality of the hosting country.  Once again, technology, innovation, culture, tradition and creativity lay at the core of the Universal Exhibition, as well as of Pirelli’s work, committed to achieving the highest qualitative levels in compliance with the sustainability and social responsibility guidelines of the most severe international standards.  From its “premium” choices to its commitment to the quality of life and work, safety and culture, Pirelli is working every day respecting the same values inspiring the Expo: energy for life, for a better and more sustainable development. Being one of the key players of the event is the best way for Pirelli to underline its international dimension and to show the company is willing to contribute to this important international event,  today as a century ago. watch?v=UM4usQ138gk