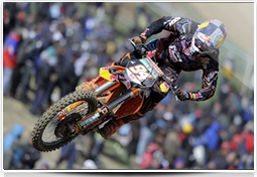 The FIM Motocross World Championship opened in excellent style for Pirelli as the fast Sevlievo course 200km east of Sofia was literally dominated by the company in all four categories. MX1 saw the Scorpion MX collect the first four positions. The premier class was ruled by works Suzuki rider Clement Desalle ahead of Yamaha’s Steven Frossard who had won the first race but placed second to the Belgian in the second moto. In third spot was Spaniard Jonathan Barragan who collected his trophy thanks to 6th and 3rd positions. Fourth place fell to Max Nagl, the German able to classify ahead of KTM team-mate and world champion Tony Cairoli; the Sicilian ending the day in ninth after sustaining an injured left knee in the first moto. It was an unfortunate day for David Philippaerts, the Italian managed 4th in the first moto but could only score 14th later on after a fall on the first corner of the second race. The MX2 podium was a Scorpion MX clean sweep.  German Ken Roczen aced both motos at a canter. Second overall went to former vice-world champion Tommy Searle on his first race back on the GP scene since returning from the USA. He beat other Pirelli riders Jeffrey Herlings and Gautier Paulin. The same tyres booted the KTM of Women’s Word Champion Steffi Laier who ruled the opening round of the series in Bulgaria and also the Suzuki of new Under 17 Italian Champion Simone Zecchina who claimed the opening event in the European 125cc two-stroke competition. “Our riders tried the MidSoft 32 and the MidHard 454,” explained Giovanni Gatti, responsible for Pirelli Racing “and finally for the first race they opted for the intermediate compound as they thought the characteristics of the tyre were better suited to the hard-pack with some loose soil sections. The high performance the riders enjoyed persuaded most to keep the same spec tyre for the second moto apart from Steve Ramon who elected for a Mid-Hard option. On the light and powerful 125 Zecchina chose the MidSoft 32 with the 110/85-19 dimensions on the front which he used to win the Under 17 Italian title.”