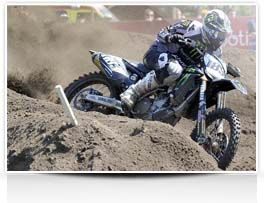 Pirelli’s grip on the FIM Motocross World Championship continues. After the opening round of fifteen in the series saw all four categories dominated by the Scorpion MX the tyre was again the protagonist from the four classes fought across the sand of Valkenswaard for the Grand Prix of the Netherlands. MX1 witnessed a strong show by world champion Antonio Cairoli, who despite injuring his knee at the first Grand Prix was able to score 1st and 2nd positions in the motos for the top step of the podium. The works KTM rider was followed by team-mate Max Nagl and Italian Yamaha rider David Philippaerts who grabbed his first trophy of the year. Fourth place belonged to Monster Energy Yamaha’s new recruit Steven Frossard. The Frenchman was nursing a very painful collarbone after a qualification heat crash but was still amazingly fast on the sand; taking second place in the first moto and fifth in the second to rise to the head of the MX1 standings. Winner of the race in Sevlievo, Clemente Desalle, could do no better than 6th on this occasion and fell a few places in the standings – the top five of which is filled by Pirelli riders. MX2 also witnessed the full potential of the Scorpion MX, with seven of the first nine classified riders using the rubber. Dutchman Jeffrey Herlings was simply unbeatable across the sand and defeated team-mate and championship leader Ken Roczen, with the pair heading Englishman Tommy Searle on the podium. A triumphant day for Pirelli colours was completed 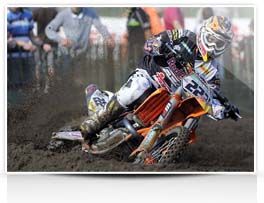 with victory by Veteran’s Champion, Sweden’s Mats Nillson, and the first two positions in the European MX2 seriesthanks to Michael Van Wezel over Jens Getteman. “The tough and sandy condition of the track again highlighted theexcellent traction and stability of the MidSoft 32 front and 410 rear,” commented Pirelli Racing Service manager Giovanni Gatti. “In a few tests we also tried the Mud 32 but it didn’t prove to be ideal for the type of track out there today and we instead provided all Pirelli riders with optimum material for the motos. We were proved right in our call as we took victory in all classes for the second time in a row.” The third round of the championship will take place at the Californian venue of Glen Helen on May 15th. MX1 Overall Classification