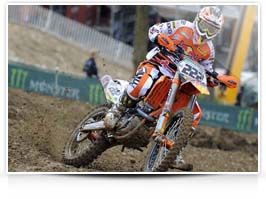 Last weekend saw a sweep of the MX1 podium thanks to a single Pirelli tyre that continues to be the standout ruler of the FIM Motocross World Championship. At the Grand Prix of France, the fifth round of the season disputed at the St Jean D’Angely circuit 100km north of Bordeaux, the Scorpion MX ruled the MX1 and MX2 categories in the same manner in which it owned the previous four events. On this occasion the premier class was claimed by works Yamaha rider Steven Frossard, who was able to taste his first success in a maiden MX1 season and has quickly adapted to the bigger machine while being firmly in contention for the title. The Frenchman finished ahead of other Pirelli riders Antonio Cairoli, second overall, and Clement Desalle; the Belgian maintaining the lead in the championship despite two crashes in the first moto that led to a 11th place result. Xavier Boog was 4th and ahead of Brazilian GP winner David Philippaerts, whose 3rd place in the first moto was diminished somewhat by two crashes and 18th in the second. In MX2 Englishman Tommy Searle walked the top step courtesy of his second moto victory. The Kawasaki rider finished in front of American Zach Osborne and Frenchman Gautier Paulin. Ken Roczen missed the podium for the first time this season after two falls in the second race was in stark contrast to his dominance of the first. KTM team-mate Jeffrey Herlings also made errors and classified 4th. “On Saturday the ground was very dry and packed so we suggested the MidHard 454 to our riders,” said Giovanni Gatti, Head of the Pirelli racing service. “However the strong storm on Saturday changed things and loosened and softened the ground so we switched to the MidSoft 32. Frossard and Cairoli elected to use a Scorpion Pro on the front because of the mixed terrain similar to that found on Enduro trails, while Searle rode the first moto with a 120/80-19 on the rear for slimy conditions and the second with 110/90-19 for firmer ground.” Round six will take place in Agueda for the Grand Prix of Portugal. 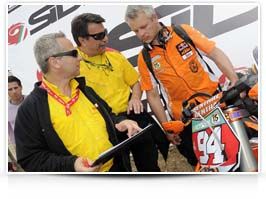 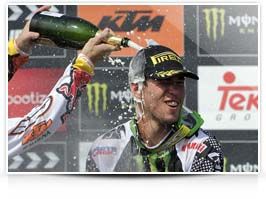 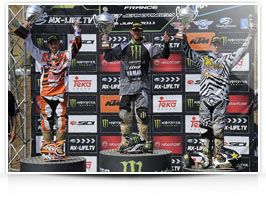 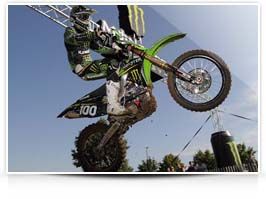