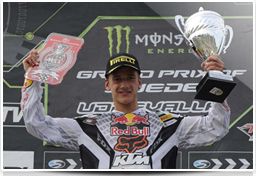 The treacherous Swedish terrain of Uddevalla entertained the eighth round of fifteen in the FIM Motocross World Championship and the mixture of loose soil and hard-pack terrain further emphasised the proficiency of Pirelli tyres with two overall victories and wins in all four motos: Frenchman Steven Frossard owned MX1 while German Ken Roczen aced MX2. The Grand Prix of Sweden was anotherpowerful assertion of the capabilities of the Scorpion MX in particular as the rubber has practically dominated the first half of the season. The midway point of the MX1 series was marked by domination from the works Yamaha as winners ahead of Evgeny Bobryshev and Honda while third position was enough for KTM’s Tony Cairoli the lead in the championship standings after a bad day for Clement Desalle who was weakened by a shoulder injury while competing in Belgium last week. 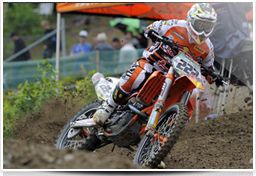 A 1-1 moto score was also taken in MX2 as Roczen beat team-mate Jeffrey Herlings and Gautier Paulin, and increased his lead in the points table. The day also saw strong performances from Max Anstie (4th) and Christophe Charlier (5th). Racing Service Manager Giovanni Gatti was thrilled with the results throughout the Grand Prix and also the second position overall in the European 125 two-stroke competition obtained by Simone Zecchina who maintains his advantage at the top of the championship. “The special build, strength and traction of the MidSoft 32 benefitted the Pirelli riders here and this was evident in the results,” said the technician from Milan. “The combination of the skills of the riders with the potential of the tyres we put at their disposal left no options for the competition and thankfully this has been the case from the very start of the season.” The next round will take place on the tenth of July at Teutschenthal, west of the city of Leipzig in eastern Germany.