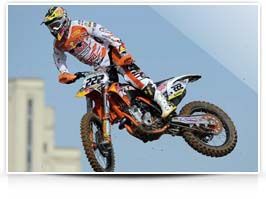 The Pirelli Scorpion MX asserted its authority on the seventh round of the FIM Motocross World Championship by sweeping every step of the MX1 and MX2 podiums. The Grand Prix of Spain produced surprising results as the winners at the Circuito de Salgada were two riders who left Portugal last week carrying injuries. Four-time World Champion Antonio Cairoli showed his continual prowess over his peers with two holeshots and a second moto win in spite of a sore hand that prevented the Sicilian from training during the week. He was a close runner-up in the first moto and then disappeared to victory in the second to ensure his overall MX1 triumph and to rest just one point behind Clement Desalle in the series standings. The Belgian works Suzuki rider made mistakes in each race and could not rise any higher than 4th. Yamaha’s David Philippaerts and Steven Frossard were on the podium with 2nd and 3rd respectively. MX2 was under the firm control of KTM factory rider Ken Roczen, who was uncatchable in each race despite suffering a spectacular and painful fall at Agueda last Sunday. He was a comfortable distance both times over rivals Tommy Searle and GautierPaulin; the duo filling the other podium spots respectively. Roczen’s KTM team-mate Jeffrey Herlings was asteady fourth to maintain his position at the top of the MX2 points table and retain the red plate he earned seven days ago. “Mission accomplished for the MidSoft 32,” said Giovanni Gatti, head of the Motocross Pirelli racing service. “The tyre proved its high potential on this stony Spanish terrain thanks to its traction and agility. As if the fantastic results were not enough, the Scorpion MX was also successful in Italy thanks to Women’s World Champion Stephanie Laier who claimed the 2010 title with Pirelli and won today.” The FIM Motocross World Championship will now pause for a week before resuming on July 3rd at Uddevalla for the Grand Prix of Sweden. 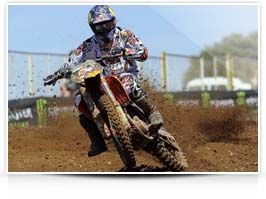 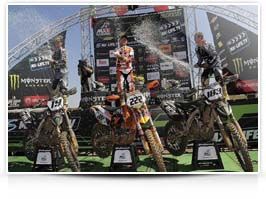 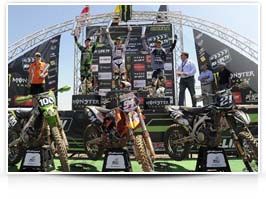