The European Rally Championship concludes its 2018 season at Rally Liepaja, where the one remaining title still up for grabs, that of the Junior Under 28 category, will be decided. Only one thing is known: that the winner will be a Pirelli driver, like all the other 2018 ERC champions that have already been decided, including the overall champion Alexey Lukyanuk, who delivered Pirelli a fourth consecutive European title.

An already extraordinary haul. With all three drivers in contention using Pirelli tyres, the name of the ERC Junior Under 28 champion will be added to that of the overall champions Alexey Lukyanuk and Alexey Arnautov (Ford Fiesta R5), the European Junior Under 27 champion and leader of the ERC3 category Martins Sesks (Opel Adam R2) and the ERC2 champion Tibor Erdi jr. (Mitsubishi Lancer) as triumphs for the Italian company.

The challenge. The 21-year-old Russian Nikolay Gryazin (the recent winner of Rally Poland), 26-year-old German champion Fabian Kreim and 24-year-old English European Junior Under 27 champion Chris Ingram are the three drivers, all using the Skoda Fabia R5, playing for the Under 28 title and probably also the rally victory in Latvia.

The Pirelli drivers. In addition to Gryazin, Kreim and Ingram, the drivers replying on Pirelli tyres in Latvia are numerous as always, and include the ERC2 champion Tibor Erdi Jr, who will make his debut behind the wheel of a Skoda Fabia R5. As usual, Pirelli will supply all of the Junior Under-27s, with the new champion Martins Sesks celebrating the title on the streets of his home city, Liepaja, where his father is mayor.

The tyres. Pirelli will supply its Scorpion K gravel tyres. On paper, the preferred choice will be for the softer K8, but the K6 will also be available. The ERC Junior U27 drivers will be able to choose between K6 and the toughest K4.

The rules. During the rally the ERC1 (R5) and ERC2 (Gr.N) drivers can use up to a maximum of 18 tyres, while for two-wheel drive cars in ERC Junior U27 the maximum is 12.

Terenzio Testoni, Pirelli rally activity manager. “Rally Liepaja is one of the fastest gravel rallies, with very high average speeds. An important challenge for the tyres, which will have to guarantee strength, precision and reliability. We are very proud to see that most of the young European talents driving R5 cars have chosen Pirelli: confirmation of our philosophy to support young drivers and which will see them also competing for overall honours in Liepaja.” 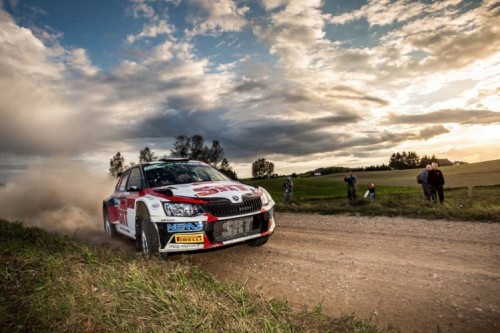 For more information about Pirelli, contact Anthony Peacock on +44 (0)7765 896 930 or anthony@mediaticaworld.com