First Italian round of the season for the eni FIM Superbike World Championship; Pirelli visits Imola with a new rear soft compound

On the occasion of the fifth round of the production derived series, the Autodromo Internazionale Enzo e Dino Ferrari of Imola will also host the fourth instalment of Pirelli SBK® Track Days, the first of two for Italian motorcyclists (on the Monday following the race weekend)

After the opening round in Australia, the historic debut in Thailand and two events in Spain and The Netherlands, the eni FIM Superbike World Championship makes a stop in Italy at the Autodromo Internazionale Enzo and Dino Ferrari in Imola for the fifth round of the 2015 season. For this occasion, Pirelli will debut a new rear tyre dedicated to the riders of the Superbike class, the development solution T0611. This solution uses a very soft compound which can provide excellent performance with high temperatures of the asphalt and could prove to be a favourite of the riders. At the moment Jonathan Rea (Kawasaki Racing Team) firmly leads the overall championship standings with 50 points, ahead of closest rival Leon Haslam (Aprilia Racing Team - Red Devils) and 67 over the Ducati rider Chaz Davies (Aruba.it-Racing Ducati SBK Team).  Imola could strengthen the position of the rider of the manufacturer from Akashi but also the bearers of the two Italian motorcycle machines can definitely aspire to win. As was the case in Thailand, Spain and The Netherlands, on the Monday after the races Pirelli will hold a track day on the Italian track, the fourth round of the initiative Pirelli SBK® Track Day. All motorcyclists using Pirelli tyres can participate (after a registration system) and experience the excitement of the eni FIM Superbike World Championship and feel for a day. The Autodromo Internazionale Enzo e Dino Ferrari of Imola VS the tyres: large temperature fluctuations and aggressive asphalt in the case of low temperatures The Autodromo Internazionale Enzo e Dino Ferrari is a circuit located in the city of Imola and dedicated to Enzo Ferrari, founder of the famous car company, and to his son Dino. In the layout for motorcycle races, it is 4936 metres long with 9 curves to the right and 13 to the left and it’s one of the few tracks in which you run counterclockwise. The radius of the curve varies from a minimum of 11 metres to a maximum of 94, the finish straight has a length of 350 metres and pole position is on the left. After several works of modernization over the years, in August 2011 the circuit has undergone resurfacing of the road surface, which covers about 70% of the track. The circuit has regained a good level of mechanical grip but at the same time significantly increased aggressiveness on the rear tyres, especially with low to medium temperatures. The circuit is recognised all over the world as a rather technical and difficult track with complex turns and braking sections, and it is raced at a fast pace that demands excellent riding skills. At the very slow Tosa bend, the rear tyre traces a narrow line, but manages to provide the traction needed without losing side grip. As the rider comes out of this bend, the rear tyre heats up less than on the fast turns. The external temperature of the tyre goes from 50°C coming into the turn to 120°C going out on the shoulder, affected with a lean angle of about 56°. 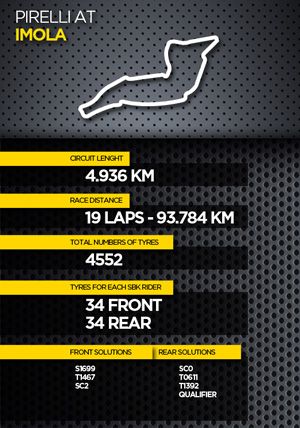 At the Variante Alta you go from one side of the tyre to the other from -55° to +55° at an astonishing speed of 100°/s. In the first phase of the curve the tyre's steel belt helps to heat the opposite side of the compound which will be used less than a second later. After a long downhill section you come to Rivazza, where the front tyre suffers heavy stress - in about a half second the load on the tyre goes from 125 Kg to 250 Kg. As for the front tyres, the Imola circuit leaves quite a bit of room for the riders' taste and riding style. With an extremely technical layout made up of straight stretches with decisive, downhill braking sections, chicanes and turns, the front tyre selection is always a mixture, without any significant critical issues for soft or more robust front tyres. The Pirelli solutions for Superbike and Supersport classes:

For the first Italian round of the eni FIM Superbike World Championship Pirelli brings to the Autodromo Internazionale Enzo e Dino Ferrari in Imola 4552 tyres, the amount necessary to meet the needs of the four classes that are part of the World Championship and European Junior Cup. For the Superbike class in total there will be 1911 tyres dedicated to the event. Each rider has a total of 34 front tyres and as many at the rear, for Supersport riders the amount is instead 22 front and 21 rear; for a total of 1161 tyres brought to this class. As for the other classes, for the Superstock 1000 the quantity of tyres is 640, 600 those for the Superstock 600 and 240 those for the European Junior Cup. In Superbike every rider has 3 dry solutions for the front and as many for the rear plus intermediate and wet tyres and the rear qualifier tyre that riders can use in the two sessions of Superpole on Saturday. At the front in addition to the standard SC2 and the development SC1 S1699 Pirelli brings again, after the debut of Assen, the specification T1467, which uses a medium-soft compound as the SC1 but which, unlike the S1699, is more protected from wear and at the same time it should be more stable than a SC2. To the rear the same two solutions already brought to Spain and Assen: standard SC0 and development SC1 T1392, which differs from the standard SC1 for a different construction system that guarantees a behaviour more homogeneous and constant for the duration of the race. To these is added as a third option a new development SC0, the T0611, which uses a very soft compound and can offer a very high level of grip when used with high temperatures. For Supersport the solutions already seen in action at Aragón and Assen are back to the scene: for the front the standard SC1 and the development SC1 S1485, which made its debut at Misano in 2014 and has also been taken to Portimão and Magny Cours last year. This second option usually provides more support in the approach to bends in favour of a better steering precision (and this year has been brought to Australia, Spain and The Netherlands.) At the rear the standard SC1 and the soft T0957 which debuted in Aragón and then was taken also to Assen. It differs from the standard SC0 with a different construction system that guarantees a behaviour more homogeneous and constant for the duration of the race.

First Italian round of the season for the eni FIM Superbike World Championship; Pirelli visits Imola with a new rear soft compound
Newsroom