Alistair Fisher has claimed his first win in the Pirelli-backed WRC Academy on the Rallye de France Alsace: the penultimate round of the young driver-training series. Co-driven by fellow Briton Daniel Barritt, 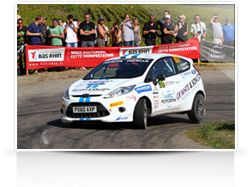 Fisher was declared the winner after Yeray Lemes was handed a five-minute penalty after the event for his second speeding offence on a road section. Lemes – who has been selected to drive Volkswagen Motorsport’s Skoda Fabia S2000 on the Rally of Spain next month – took the lead on stage 10, after Craig Breen went off. The WRC Academy aims to teach drivers about every aspect of competition at the top level of the sport, by offering training in all the skills needed to become a complete professional – including tyre choice and use. The 16 Academy drivers who started the Rallye de France were allowed to use a maximum of 18 tyres on the event, out of the 16 P Zero RX5 tyres and 12 P Zero RE7 available to each crew. The RX5 is a hard compound designed for warm and dry conditions, which characterised the Rallye de France, held in temperatures of up to 30 degrees centigrade. The RE7 tyre is by contrast a soft compound, for rain or cold conditions – which were experienced during some of the early morning stages in France. However, the RX5 tyre also proved to be effective in these marginal conditions. The challenges on the rally this year were extremely varied, with overnight humidity making the roads slippery in the mornings, plus plenty of stones and loose gravel as well as rocks littering the stages, caused by cars cutting the corners. In an attempt to stop this happening the rally organisers had placed metal poles on the apexes of the corners, but this actually created an extra difficulty. The poles were often knocked over by earlier runners, exposing sharp metal for the WRC Academy drivers to run over. Despite this, only three of the WRC Academy competitors picked up punctures caused by the poles, on a rally that proved extremely tough on tyres for the leading runners. Temperatures tended to climb rapidly during the afternoons, meaning that the tyres had to perform effectively under a very wide range of asphalt conditions. The demands of the Rallye de France ensured that the main contenders for the inaugural WRC Academy title both hit trouble, so the championship will now only be decided on the final round in Great Britain on gravel. The highest-placed of the six Pirelli Star Drivers, selected by an international jury last year, was Australia’s Molly Taylor, who claimed her best finish of the year in fourth. Pirelli senior engineer Matteo Braga said: “For us, it’s very important that our young drivers learn as much as possible, and France certainly provided them with a very strict education. We deliberately reduced the rubber allocation by two tyres compared to the previous round, in order to accustom our drivers to consider carefully how to best match their selection to each loop of stages. The parameters here were extremely complex, forcing them to think on their feet and concentrate on how to get the best out of our tyres. Despite some of the most wide-ranging asphalt conditions that we have ever encountered, our tyres demonstrated both performance and consistency, enabling us to look forward to a thrilling championship finale.” Pirelli is the official tyre supplier to the WRC Academy, which pitches 16 young hopefuls together on six WRC events on asphalt and gravel. They drive identical Ford Fiesta R2s prepared by the British M-Sport organisation in Poland. The WRC Academy Cup concludes on the Rally Great Britain, an all-gravel event based in Wales from 10-13 November. With rain and mud expected on what has traditionally been an extremely successful event for Pirelli, thanks to seven overall wins in the last 10 years, the conditions could not provide a bigger contrast to the stages in Alsace. *** For further information contact: Anthony Peacock +44 7765 896930 anthony@mediatica.co.uk>